The Veronica Blumhorst Case, Part 2: A public message and a private suitcase 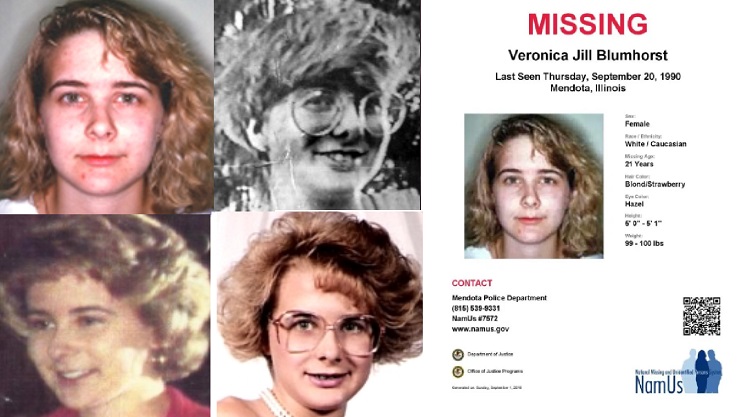 Editor’s note: The following is the second installment in a series about the disappearance of 21-year-old Veronica Blumhorst, who vanished Sept. 20, 1990, after finishing her shift at a Mendota, Illinois, grocery store. Her car was found in her garage less than a mile away. It is believed she had only $10 on her when she vanished.

MENDOTA, Ill. – A lot transpired after Paul and Betty Blumhorst learned on the morning of Sept. 21 that their daughter, 21-year-old Veronica, had disappeared.

Droves of people helped search for the Dempsey’s Super Valu clerk, scouring farmland and wooded areas in and around Mendota. Several law enforcement agencies and rescue teams joined the effort as the Blumhorsts waited for a sign–any sign—that she was safe.

As daylight waned, Paul and Betty spoke to investigators and anyone they could in hopes of turning up some sort of clue. Veronica’s boyfriend had spoken to police, too.

As Paul spent the morning inquiring about Veronica around town, the boyfriend reported her missing. Two days later, he sat down with investigators and laid out scenarios of how he may have had something to do with her disappearance. Before that meeting, however, he did something else, just hours after calling police.

During the halftime show of the WGLC radio broadcast of the Sept. 21 Mendota High School football game, her boyfriend convinced producers to play a message he recorded for Veronica. The taped plea was followed by a polka song.

“I am making this recording for you because me and all your friends and family miss you,” he said. “We want you back. I don’t care what the problem is. I don’t care where you are or whoever you’re with. I won’t be happy until you’re back with me. I hope I haven’t pushed you (or) anything. I don’t think I have. I want you to know I love you, everybody else loves you, and we’re waiting to hear from you ’cause we got some sad people. And wherever you are and whatever you’re doing, call the Mendota Police Department at 539-9331 ’cause I love you I know you love me.

“So, I brought this tape for you to hear ’cause it’s gonna be strange to a lot of people out there but you know this song. And it’s for you. And you know I always think of you when I hear it. Veronica, I love you.”

The polka song included the lyrics, “Got those pretty green eyes that are so inviting. I’ll take those green eyes over brown or blue. Those green eyes, someday I’ll marry you.”

‘Not since she’s been dead’

Sept. 23, two days after he reported Veronica missing, her boyfriend enveloped police in a string of odd statements that he may harmed her but couldn’t remember. After those statements, the conversation about the contents of a suitcase he owned piqued the interest of investigators. In the suitcase, police found pornographic magazines and condoms.

Continuing the interview, the officer inquired whether her boyfriend masturbated to the thoughts of Veronica since she’s been missing.

The man also told police that he may have done something to Veronica because his co-workers at the local newspaper “put him down,” prompting him to do something to “make the front headlines.”

Trump: Afghanistan is safer than Chicago