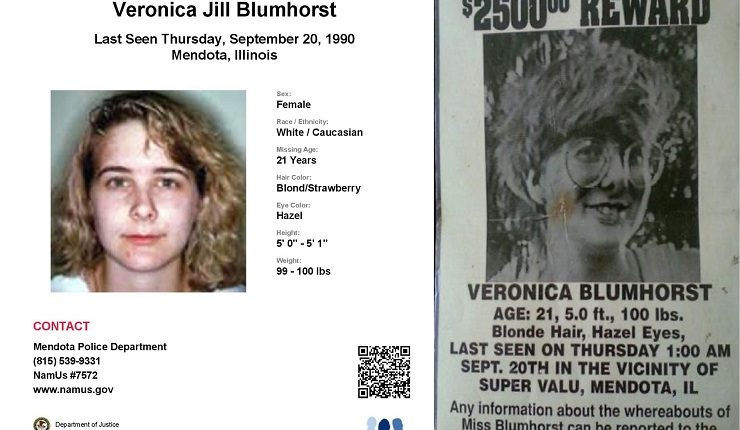 Editor’s note: The following is the third installment in a series about the disappearance of 21-year-old Veronica Blumhorst, who vanished Sept. 20, 1990, after finishing her shift at a Mendota, Illinois, grocery store. Her car was found in her garage less than a mile away. It is believed she had only $10 on her when she vanished.

MENDOTA – Before Veronica Blumhorst went missing on Sept. 20, 1990, she had been romantically involved with a man who witnesses say was prone to angry outbursts.

One of the man’s co-workers at The Mendota Reporter newspaper and Veronica’s childhood friend told police in 2004 that it didn’t take much for him to lose his temper. And while Veronica was thrilled to be in the relationship at first, the cute boy from a nearby town became possessive and controlling.

“She called me several times,” the witness said. “She would say, ‘He’s mad at me and I don’t know why.’ There were obvious things–like she was supposed to be home from work at a certain time. She was 10 minutes late and he would be irate. She was, at times, at bit afraid of him.”

The man also showed his angry side at the office.

After Veronica disappeared and her boyfriend reported her missing, his co-worker said she had a one-on-one experience with him that stuck with her for 14 years.

“I remember getting a call from him at night, asking me to come down to The Reporter,” the then single mother told police. “Keep in mind, he was my manager. So, I went down there, and it was very creepy because it was obviously not work-related. I left.”

What happened next, she said, was even more unsettling.

“He followed me. I let him in, and that’s when he sort of cross examined me,” she said. “(He said), ‘Do you think I did this? Are you afraid of me? How could you think I would do this? Do the cops suspect me?’ He went on and on. I remember the only thing I wanted to do was get him out of my house.”

Publisher Kip Cheek, who worked in the sports department in 1990, had a run-in with Veronica’s boyfriend the morning of Sept. 20 as a crowd gathered outside the Blumhorst home.

“I was showing the new editor of The Mendota Reporter around town,” Cheek told police. “I took him around town to show him the churches, schools and businesses. We were driving down 13th Avenue, and I saw a bunch people and police cars down Monroe Street. So, we turned down the street to see what was going on.”

Cheek saw his co-worker on the sidewalk in front her house and pulled over to talk to him.

“(He) was totally out of control,” Cheek said. “He walked up to the car. He just blew up and said something like, ‘If you take any pictures, I will pull the film out of the camera myself.’ (He) was so angry and outraged over us being there, it seemed unusual. There were police and other people standing in the yard. But when we pulled up, he just flipped.”

And although there were no definitive signs that Veronica was being abused, her family did recall an incident that in retrospect could have been the outcropping of something violent about the relationship she was in with the young man who enjoyed polka music.

“She went with (him) to a polka festival for a weekend and came back with bruises on her face,” brother Todd Blumhorst told The Times a year before he died in 2013. “She told Mom and Dad that she hit her face on a speaker.”

The bruises were never mentioned again.

For whom the Bears toll