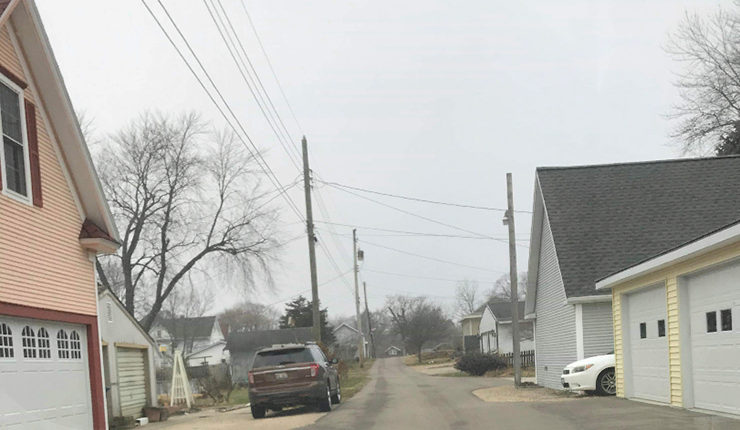 Editor’s note: The following is the ninth installment in a series about the disappearance of 21-year-old Veronica Blumhorst, who vanished Sept. 20, 1990, after finishing her shift at a Mendota, Illinois, grocery store. Her car was found in her garage less than a mile away and it is believed she had only $10 on her when she vanished.

MENDOTA – A large crowd gathered outside the home of Veronica Blumhorst the morning of Sept. 20, 1990, including rescue teams from nearby towns and dogs trained to detect human scent.

As searchers planned to comb the greater Mendota area, the dogs were brought to 1204 Monroe St. to establish where Veronica may have gone after parking her car in the family garage.

Getting her scent from an article of clothing, the dogs were on Veronica’s trail immediately. As expected, they indicated that the 21-year-old grocery clerk had been near the Blumhorst garage that faces an alley. The animals were also responsible for the popular theory that Veronica left with someone she knew. And while her family is not ready to discount that possibility, recent findings have prompted a new one.

After picking up Veronica’s scent, the dogs took their handlers away from the Blumhorst garage. But they didn’t get very far.

“They dogs were on her scent heavily,” family spokesman Doug Truckenbrod said. “They became confused in the alley and lost the trail after about 200 feet to the west. That has always led us to believe that she got into another vehicle at that point.”

Truckenbrod now has reason to believe that Veronica may not have immediately left the neighborhood. And part of that reasoning lies with what was done – or not done – early in the investigation. He said only a cursory search of the block was conducted as the expanded hunt for the Mendota High School graduate, who would have turned 50 last September, focused on rural areas well away from Monroe Street. Nothing was done to establish whether Veronica may have met her fate just steps from her house.

“It has always been a possibility that she did not venture far away from the alley,” Truckenbrod said. “It was just never really investigated. She may have gone to a neighbor’s house. She could have entered a nearby garage. That is why we are trying to connect dots we feel police failed to connect in the crucial hours after we discovered Veronica had disappeared.”

Truckenbrod declined to give details but said his team is looking into the possibility that Veronica visited someone at an adjacent property after she finished her shift at nearby Dempsey’s SuperValu and drove home. He is also revisiting the statements of her boyfriend, who told police that he may have driven back to Mendota that night, picked up Veronica, and hurt her during an argument. He couldn’t recall though, as an old motorcycle accident left him with memory problems.

Those statements, while incriminating on their face, may tell a different story and paint the disappearance of Veronica Blumhorst in entirely different light.

“The boyfriend or husband is usually the number one suspect in a case like this,” Truckebrod said. “And we realize that what (he) said to police was alarming. But we don’t know why he made those statements and what led him to say those things. Was he fed information by police? Did they plant it in his head that Veronica was injured in some way – possibly strangled with her work smock? Or did he come up with that on his own? It is hard to believe that he just walked in there and told them that he may have hurt Veronica. It made no sense then and it makes no sense today.”

Truckenbrod said a search planned for next spring is coming together. His team is currently seeking volunteers to investigate private land west of Bartlett Woods Nature Preserve in the town of Sublette. The search, which could happen as early as March, was organized after Truckenbrod received information that signs of Veronica may have been dumped there.

Bears’ disappointing season comes down to lack of execution