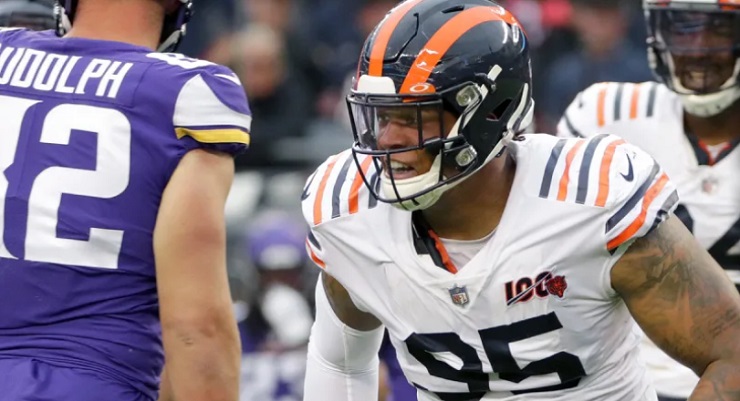 CHICAGO (AP) — Chase Daniel came through in relief after Mitchell Trubisky got knocked out of the game on the opening possession, and a banged-up defense dominated again for the Chicago Bears.

It all added up to a victory that ranked among coach Matt Nagy’s favorites, even if it came with a price.

Daniel threw for 195 yards and a touchdown after Trubisky exited with a left shoulder injury, and Chicago swarmed NFL rushing leader Dalvin Cook in a 16-6 victory over the Minnesota Vikings on Sunday.

The defending NFC North champions avoided an 0-2 start at Soldier Field and another home loss to a division rival to go with the one they suffered against Green Bay in the NFL’s 100th season opener.

“It’s definitely for sure top three, top four for me,” Nagy said. “It’s a division game at home against a really good football team. That’s number one. Here we are four games into the season, and you start out 0-1 and there’s a little bit of ‘what’s going on.’ And our guys, they just stick together.”

Things weren’t looking so good for the Bears (3-1) when Trubisky went down in the opening minutes.

The No. 2 overall pick in the 2017 draft, he was scrambling on the sixth play from scrimmage when Danielle Hunter dragged him down. The quarterback’s non-throwing arm got pinned awkwardly under his body as the ball popped out. Minnesota made the recovery, but a holding penalty against Anthony Harris negated the play.

Trubisky headed to the sideline and walked to the locker room a few minutes later. Nagy said he wasn’t sure of the extent of the injury.

Daniel came on and connected with Tarik Cohen on a 10-yard touchdown to complete a 14-play drive. The 10th-year pro completed 22 of 30 passes.

Allen Robinson had seven catches for 77 yards. Nick Williams had two sacks . Khalil Mack and Roy Robertson-Harris each had 1 1/2.

The Bears (3-1) held Cook to 35 yards on 14 attempts after he ran for at least 110 in the first three games, even though Akiem Hicks (knee) and linebacker Roquan Smith (personal reasons) missed the game. The Monsters of the Midway also held a big edge in time of possession (35:27 to 24:33) on the way to their third straight win.

“You can talk all day but these guys stepped up and did what they’re supposed to do, man,” Mack said. “Like I said, guys were stepping in big. Big Roy, Big Nick, guys were doing their job and we were able to get it done.”

Cook, who came in with 375 yards rushing, spoiled the Bears’ bid for their first shutout since 2010 when he ran it in from the 2 in the closing minutes.

“They are good, everybody knows they are good,” Cook said. “It’s one of the best defenses in the league, but it was more about us than them, so we just have to do better on our part.”

The Bears took a big step toward the NFC North championship last season when they beat Minnesota at Soldier Field. They then kept the Vikings out of the playoffs with a road win to close the regular season while sweeping them for the first time since 2011.

And they got a win they sorely needed on Sunday if they’re going to defend their division championship. Chicago outgained the Vikings 182 yards to 59 in the first half and held them to just two possessions.

The Bears took a 10-0 lead to the locker room after Eddy Pineiro’s 25-yard field goal at the end of the first half. They had to settle for another field goal after Mack sacked Cousins on the first play from scrimmage of the second half.

Chicago took over at the Minnesota 16 after Williams made the recovery, and Pineiro’s 38-yarder made it 13-0. He added a 30-yard field goal with just over three minutes left in the third.

“You really never know when your opportunity is going to come at any position but we had so many guys step up on such short notice,” Daniel said. “I mean, we had some Pro Bowlers out. You know? Your starting quarterback goes down. One of your best D linemen goes down, Akiem Hicks. Roquan. … I think it also says a lot about our coaching staff and how they’re able to get guys ready at moment’s notice.”

Bears: G Kyle Long missed the game because of a hip injury. He did not practice Thursday or Friday. … G Ted Larsen (knee) and LB Joel Iyiegbuniwe (hamstring) left the game.