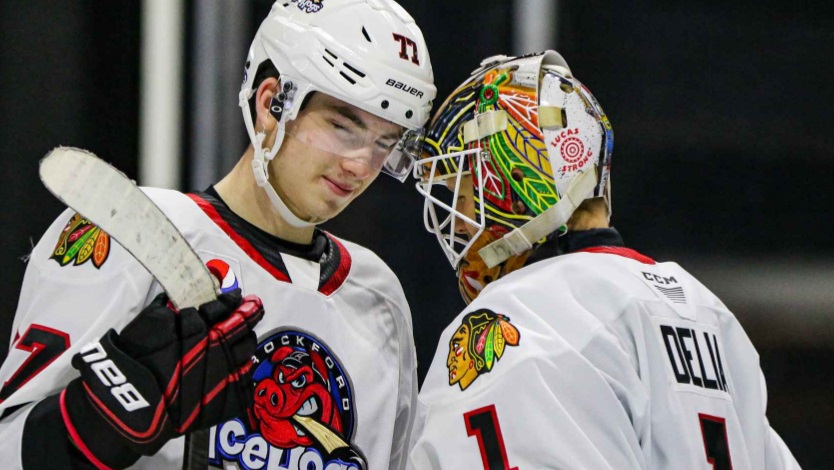 ROCKFORD – John Quenneville, Dylan Sikura and Anton Wedin each scored in the first period and Collin Delia made 29 stops to lead the Rockford IceHogs to their first win of the 2019-20 season, 3-2, over the Chicago Wolves Friday night at the BMO Harris Bank Center.

The IceHogs continued their trend from the first three games of the campaign, finding the scoreboard first to take an early lead over the opposition. Sikura netted his third goal in four games when he smartly redirected a blast from Brandon Hagel 5:28 in the opening frame. With the marker, Sikura ranks tied for 10th among all AHL skaters in goals this season.

Quenneville then doubled the advantage while shorthanded, cashing in on what began as a 2-on-1 rush. Alexandre Fortin sprung free down the right side and fired a shot on Garret Sparks, and after the rebound kicked off a backchecking Wolves forward, Fortin again fired into Sparks. This time, with the puck loose and sitting in the crease, Quenneville jammed it past Sparks to make it 2-0.

Wedin completed the first-period attack with his second goal of the campaign. He corralled the puck just outside of Sparks’ reach and wristed in a shot with less than two minutes remaining in the period.

Chicago made things interesting in the third period by pulling within a goal on a power-play tally from Gage Quinney, but Delia fended off the late surge to earn his 31st win of his AHL career. Delia now ranks tied for fourth all-time in victories among IceHogs netminders during AHL affiliation.