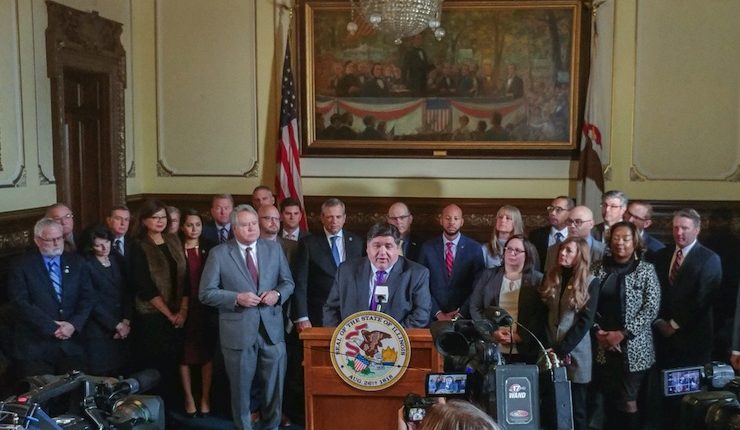 Pritzker signed the measure, passed in the recent fall veto session, in Chicago and hailed it as an initiative 70 years in the making.

“Bipartisanship in this General Assembly has achieved what none of their predecessors have been able to do: consolidate the (nearly) 650 downstate and suburban pension funds to just two, amplifying their investment power and reducing the burden on property taxpayers,” Pritzker said in a news release. “Working together, we are helping hundreds of cities in Illinois alleviate their spiraling property tax burdens, and just as importantly, we’re showing that Illinois can tackle its most intractable problems.”

The governor’s office said Senate Bill 1300, the legislation he signed Wednesday, will leverage “$15 billion in assets — $8.7 billion in the police fund and $6.3 (billion) in the fire fund — to increase investment returns and lower management costs.” It estimated the new law would create greater returns from $820 million to $2.5 billion over the next five years, and “billions more over the next 20 years.”

The bill passed with broad bipartisan support by tallies of 96-14 in the House and 42-12 in the Senate.

It was also supported by the Associated Fire Fighters of Illinois, the Illinois Fraternal Order of Police and the Illinois Municipal League, a statewide organization that represents local communities throughout Illinois

“Consolidating the assets of the … downstate public safety pension funds throughout Illinois will help provide stronger investment returns for active and retired public safety employees and reduce redundant administrative costs on Illinois’ taxpayers,” IML Executive Director Brad Cole said in a release. “This is a good first step forward on the complicated and comprehensive issue of pension reform.”

Despite bipartisan support, detractors, including several Republicans, opposed a provision that retroactively enhances benefits for so-called “Tier 2” employees — those hired after Jan. 1, 2011, when the state implemented new retirement systems with substantially lower benefits.

Several pension experts, however, have said the provision was necessary because many of those positions are not covered by Social Security. That’s allowed under federal law known as a “safe harbor” provision, but only if the benefits are at least as generous as what Social Security would pay.

The governor’s office said the new law “brings Tier 2 pensions into compliance to avoid future additional liabilities, which is estimated to cost $70 to $95 million while projected investment gains can generate an additional $820 million to $2.5 billion.”

Rep. Mark Batinick, a Plainfield Republican who serves as minority spokesperson on the House Personnel and Pensions Committee, praised the passage of the bill in a news release.

“Our state’s broken pension system has been a heavy weight on the backs of Illinois taxpayers,” Batinick said.  “With today’s bill signed into law I can proudly say that we are providing relief to our hardworking residents.  This was a significant bipartisan reform effort that will make positive change. The work is not done on pensions, but today we can all celebrate this success.”

The bill was a recommendation of the Illinois Pension Consolidation Feasibility Task Force, which is a body Pritzker created early in February.

Boone County Fair canceled because of coronavirus, other events planned