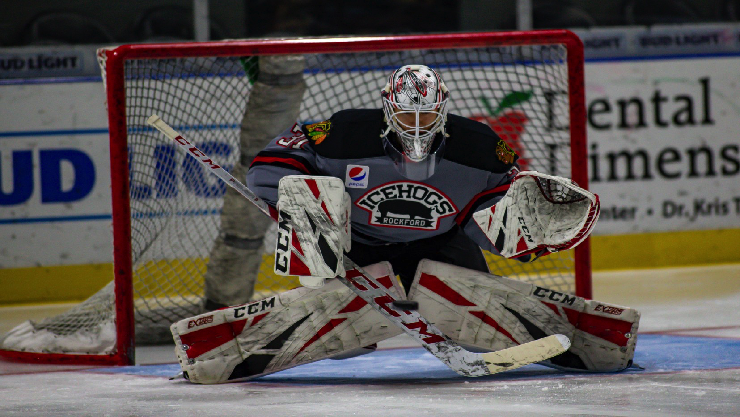 ROCKFORD – The Rockford IceHogs hit the halfway point o the 2019-2020 season this week and were in are sitting in for fourth place in the Central Division.

“We’re sticking together,” coach Derek King said of his club that’s been depleted because of NHL call-ups and injuries. “We are working hard. And if you work hard, good things will happen. And they’ve been happening for us.”

Before Tuesday’s 4-1 loss to Milwaukee, the IceHogs had dropped two straight to the Admirals last week for the first time since March 22 – 27 of last season when Rockford lost three consecutive games to the club. They’ve now matched that streak against the first-place Admirals.

The games Rockford has been losing of late have been relatively close. The club has been in them, registering a number of one-goal contests and forcing some OTs to stay in a playoff position among divisional opponents that have been trading victories all season.

Then there are lingering injuries, both with the Blackhawks and down in Rockford that still have King platooning different guys in and out of his rotation.

“Obviously we want our injured guys back and some guys with the big club back,” King said. “But we are dealing with what we have. And the big thing here is the way we started (the last two games). We played solid, structured hockey. If we continue to do that, I think good things will happen for us.”

A bright spot for Rockford this season, most notably during times of roster uncertainty, has been Brandon Hagel. The speedy forward’s 13 goals through his first 34 games as a rookie were just one behind Matthew Highmore’s goal total through his first 34 games (14 goals) during the 2017-18 season when Highmore set Rockford’s AHL rookie goal record. Highmore ultimately finished his record-setting rookie season with 24 goals in 64 games with Rockford and a pair of markers in 13 games with the Chicago Blackhawks.

Hagel contributed an assist on Lucas Carlsson’s goal last Saturday after being held pointless a night before against the Admirals.

Another Brother
In the dash to fill vacancies, the IceHogs announced Monday that they have singed forward Peter Quenneville to a professional tryout agreement and released forward Josh Winquist.

Quenneville is the older brother of current IceHogs forward John Quenneville and and has lead the Rapid City Rush of the ECHL with 45 points (20 goals, 25 assists) over 37 games this season. The feat landed the the Rush captain on the Western Conference roster for the 2020 Warrior/ECHL All-Star Classic.

The Quennevilles are the third pair of brothers to play for the IceHogs in recent years. Alex and Terry Broadhurst skated for the ‘Hogs during the 2013-14 campaign while Dylan and Tyler Sikura have been together in Rockford for parts of the last two seasons.

‘Hog Notes
The IceHogs have featured 13 different players to score at least one goal over their last 12 games since Dec. 15. The group combined for 27 total goals in that span with nine players scoring multiple goals and four with a lone tally. Nine players are forwards. Four are defensemen. Four are rookies.

Forward John Quenneville was reassigned to the IceHogs Saturday after spending nine games with the Blackhawks.