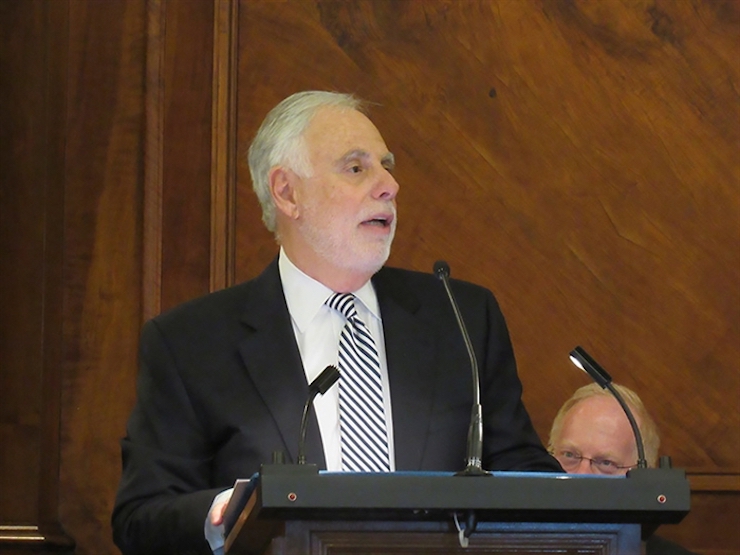 CHICAGO – Illinois Supreme Court Justice Robert Thomas, a former placekicker with the Chicago Bears, will retire from his seat on the bench effective Feb. 29.

He plans to join the Chicago-based Power Rogers law firm, which successfully represented him in a defamation suit against the Kane County Chronicle in 2006.

In a news release Monday, Thomas said “the Lord has truly blessed me” with family — his wife, three kids and soon-to-be nine grandchildren; a former college and professional football career; and the “tremendous honor and privilege of serving as chief justice.”

“While I will miss the collegial atmosphere with my colleagues on the court, I am ready to return to the practice of law and help clients achieve justice,” he said.

First elected to the high court in November 2000, and voted chief five years later, he was instrumental in opening its activities by allowing the online publication of video and audio from oral arguments. Thomas also supervised a mandatory continuing education program for Illinois lawyers and judges and established the court’s Commission on Professionalism.

Thomas is the first Supreme Court leader from DuPage County. In remarks after ascending to the role, according to a news release, he promised to “[serve] the cause of justice, to [walk] humbly, and to never [lose] sight of the tremendous privilege that it is to wear the judicial robe, and to serve the people of this state.”

“Justice Thomas was the chief when I joined the court and he cultivated a welcoming and professional environment,” Chief Justice Anne Burke said in a news release. “His great sense of humor made a challenging job more enjoyable for everyone.”

He wrote numerous influential opinions while on the bench — ones that confirmed former Gov. George Ryan’s commutation of Illinois’ death row inmates’ sentences was constitutional; that Ryan, due to his federal felony convications, was not allowed to collect his two state pensions; and that former Chicago Mayor Rahm Emanuel was eligible to run for that office.

Thomas’ football career included 10 years with the Chicago Bears and stints with the Detroit Lions, San Diego Chargers and New York Giants. He kicked collegiately at the University of Notre Dame.

While playing for the Bears in 1977, Thomas kicked a 28-yard overtime field goal that sent the team to the playoffs for the first time in 14 years. He was inducted to the Chicagoland Sports Hall of Fame in September 2012, and is the fourth-leading scorer in Chicago Bears history.

Thomas is the third justice to retire in two years, following Charles Freeman in June 2018 and Lloyd Karmeier in November 2019.

The Supreme Court filled the vacancy that will be left by Thomas’ retirement by a vote of the justices. They appointed Appellate Justice Michael Burke, who is not related to Chief Justice Burke and will serve from March 1 to Dec. 5, 2022, to that seat.

According to the state’s Constitution, Burke will serve beyond the conclusion of Thomas’ term to the next judicial election because there is less than 60 days before the March 17 primary.

A swearing-in date has not yet been determined, a court spokesperson said.

Burke was chief of the DuPage County State’s Attorney’s Office’s Special Prosecutions Unit in 1991. He was elected to the circuit court in 2002, after being appointed to the bench a year earlier.