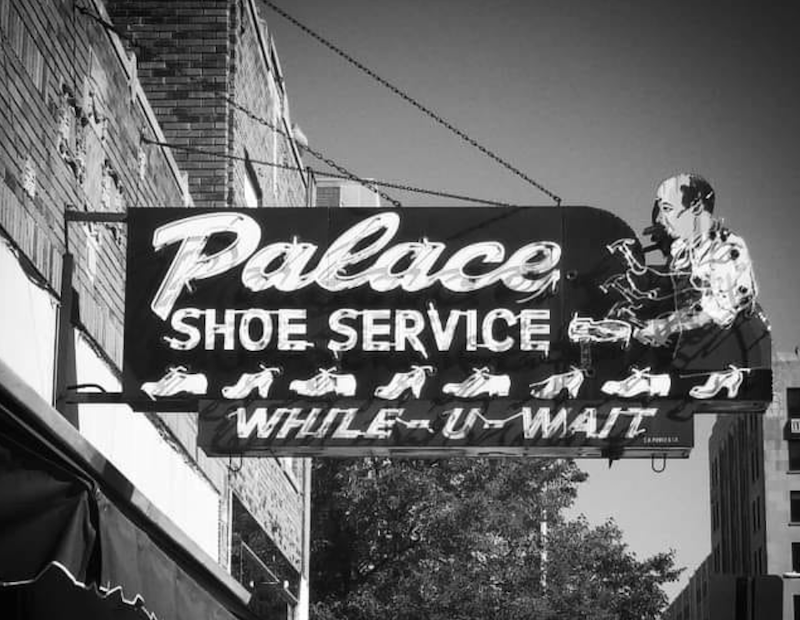 ROCKFORD — A local shoe-repair shop is still thriving in a little piece of the city it carved out for itself more than 90 years ago.

Even throughout the Great Depression and the early 1980s, when Rockford’s downtown started taking the shape of a ghost town, Palace Shoe Service has remained at  204 N. Main St.

The shop is where brothers Dave and Tom Giamalva have seen generations of customers stay with them over the years. They still see some they knew back when they were learning the business from their father, a second-generation proprietor.

The shop’s interior is what one would expect from a classic cobbler’s lair. Leather and rubber–that “new-shoe smell” dances in the air. The walls don shoes, purses and belts, and repair jobs flank the machinery that marks the crux of the business.

Each component, from the cans of polish on the counter, the smell itself—and those machines—have made Palace a local mainstay since 1926. Then there’s the quality products and service, both of which continue to attract new customers from all over the region.

“We’ve been here since we were kids, hanging out and polishing shoes,” Dave said of how he and Tom became involved in the family business.

There were more than 70 shoe-repair shops in Rockford then, when customers didn’t buy assembly lined footwear. It didn’t exist.

Just about everything was handmade then, which meant quality shoes and boots were relatively expensive and people would make them last as long as they could. Of course, as more companies streamlined their manufacturing, the demand for the cobbler dwindled.

As a result, customers were soon opting for less-expensive products they simply discarded when they showed a bit of wear. That’s not to say people aren’t having shoes repaired today. It’s just that the decision is weighed differently than it used to be.

“If someone’s attached to them, they’ll repair them,” Dave said.

Nonetheless, there aren’t 70 repair shops in Rockford anymore. In fact, businesses like Palace aren’t common anywhere in the county.

“There are fewer and fewer shops like this every year,” Dave said. “There can’t be a whole lot left. Shoes have cheapened up a lot. A lot of them aren’t American-made anymore. So, you might only pay $40 for a pair. But they can still be good quality.”

And because most footwear—namely dress shoes and work boots—are timeless, there’s still plenty of business for  Palace, the city’s only full-scale =shop. And to change with the times, the brothers have continued their commitment to quality and service while adding top quality products to their sales lines.

“We do a lot of that business and fix a lot of them,” Tom said. “It’s been like that for about the last seven years, and it’s all word-of-mouth.”

It’s impossible to know what the next 92 years might look like for Palace Shoes. But one thing the Giamalvas are sure of is that while their marketing plan may have to be tweaked here and there, their philosophy won’t change.

Palace is also one of the few businesses left in Rockford that took its name from its proximity of a noted landmark. In Palace’s case, it was the Palace Theater, a vaudeville hall that operated from 1915 to 1955 at 115 N. Main St. It’s been a parking lot since 1984 but its namesake continues.

Our City, Our Story. A passion for the clippers

What’s Local: ‘A Local Holiday Market’ back for ninth season