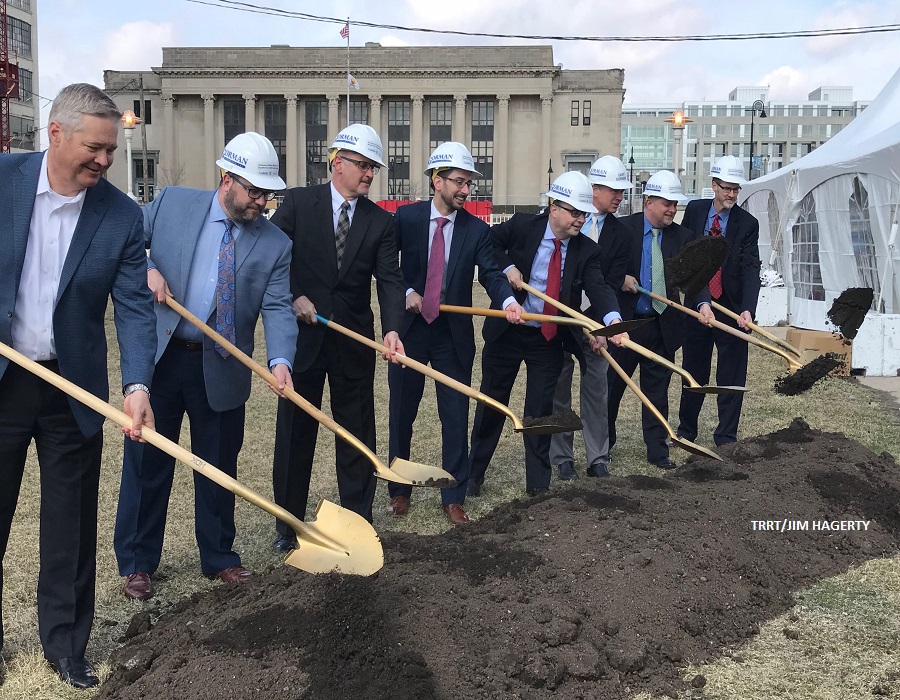 With work underway behind him, Gorman addressed a crowd of about 200 about what went into what has been a years-long journey that began with saving the building from the wrecking ball.

“There were bumps in the road, but it got done,” Gorman said. “People are going to come to this hotel and conference center and they are going to be impressed.”

The project began eight years ago among a small group of downtown visionaries calling themselves Friends of Ziock (FOZ) who wanted to redevelop the former factory. The city had other plans, like re-purposing its material for the new Morgan Street Bridge that was completed in 2013. The only way to save Rockford’s first skyscraper was to have it added to the National Register of Historic Places.

“They’d been talking about tearing it down,” Don Bissell said.

Bissell, along with Kyle and Marge Bevers, were the driving forces behind FOZ, which first bucked the city’s demolition plans then secured the Amerock building’s place as a historic site.

“A plot of grass on this spot wasn’t going to do anything for the city,” Bissell said. “The best form of recycling is to use what exists and convert it to something. It puts it back on the tax rolls.”

Friends of Ziock mulled several uses for the now 116-year-old building including an apartment building with retail on the ground floor. With other downtown projects centered on tourism in the hopper, however, a flagship hotel was the most sensible idea.

“It took faith and commitment to get us where we are today,” former Mayor Larry Morrissey said.

Morrissey worked closely with Gorman on the initial 2014 capital stack, one that first included a train station and a different price tag. Back then, the project was estimated at $67 million and the city’s investment was $20 million from the motor fuel tax to build a parking deck.

The parking deck has since been scrapped as has the Amtrak hub. The hotel is now an $87 million deal that includes a $12.5 million public investment for the adjoining 40,000-square-foot-convention center. When finished, the venue will boast 160 rooms, two restaurants, rooftop lounge with two levels of outdoor seating, access to Davis Park, swimming pool, game room for kids, and more.

“We’ve been dreaming about this riverfront property for many years,” Rockford Area Convention & Visitors Bureau CEO John Groh said. “And that goes back to the early and mid-’80s when we started thinking about the future of Davis Park and we continued to dream about what would come now with the investment of the hotel. Today marks the baseline from which we will measure the future progress and growth of our center city. I think of the groundbreaking as a starting line, not the destination.”

Tom McNamara was the Third Ward alderman and mayor-elect last year when the city council approved the final hotel plan. One of his final orders of business before taking the reins from Morrissey was to vote for the project and open scores of local jobs.

“We have 400 local union (workers) working behind us,” McNamara said. “Once construction is done, we will have 140 jobs here for our citizens. I believe this is a major turning point for our downtown. I’m proud of the work done by the previous and current city councils to make this vision a reality.”

The city’s $12.5 million investment is projected to have a more-than $700 million economic impact.