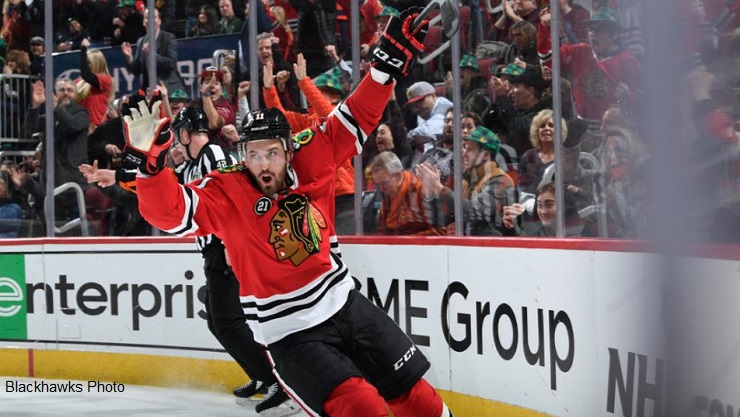 CHICAGO — Brendan Perlini had a record night Monday, logging a hat trick against his former club and Chicago ran away with a 7-1 victory over what had been a surging Arizona team.

Chicago outshot the Coyotes 6-0 to begin the game but Arizona’s first positive shift turned into a goal. Former Blackhawk Richard Panik put Arizona up 1-0 at 4:27 of the first period on their second shot.

The scoring goals on former teams theme continued, this time for Perlini.

The former Coyotes forward stayed hot when he buried the equalizer for Chicago at 6:38 of the opening frame. Perlini was assisted by Brent Seabrook and Alex DeBrincat.

Jonathan Toews set up Brandon Saad in front with a nice effort, giving the Blackhawks a 2-1 edge at 8:09 of the first. Erik Gustafsson recorded the second assist.

Perlini buried his second of the game at 3:16 of the second, putting Chicago up 3-1. Dylan Strome and Dominik Kahun recorded the helpers.

The Blackhawks fourth line continued their productive run as Chris Kunitz potted his third of the season at 6:26 to make it 4-1. David Kampf and Marcus Kruger had the assists.

The rout continued with Patrick Kane tapping home his 41st of the year, assisted by Artem Anisimov and Kahun at 8:50 of the second.

The captain punctuated the middle frame by scoring his 30th goal of the season on a penalty shot at 14:08. The goal put the home team ahead 6-1 entering the third.

At the end of the game, Chicago was trying to get Perlini the hat trick after a few near misses and they ended up doing so on the final rush of the game with just 3.6 seconds left in regulation.

HEAR HIM HOWL: Perlini scored three against his former team, giving him six goals in his last five games. The red-hot forward now has 10 goals on the season. He had just two goals in 22 games for the Coyotes before the trade to Chicago.

OH CAPTAIN, MY CAPTAIN: Toews’ fantastic season continued as he reached 70 or more points for just the second time in his career. He’s just five points shy of his career high of 76 set in 2010-11.

THE 30 CLUB: DeBrincat, Kane and Toews are the first Blackhawks trio to record 30 or more goals each since Tony Amonte, Eric Daze and Steve Sullivan in 2000-01.

WHAT’S NEXT: The Blackhawks hit the road to face the Toronto Maple Leafs on Wednesday at 6 p.m. CT. The game can be seen on NBCSN or heard on WGN 720. R.