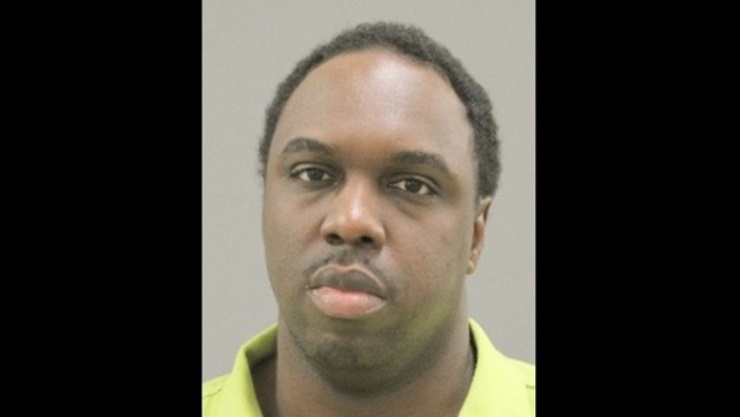 ROCKFORD — It took a jury four hours Monday to convict a Rockford man of beating his girlfriend to death the day after he was released from prison three years ago.

Terrell D. Ellis, 38, was convicted of three counts of first-degree murder in the death of 35-year-old Monica Box. Prosecutors claimed Ellis flew into a jealous rage on April 28, 2016 and hit Box repeatedly in the head with a claw hammer and plastic laundry basket.

Warnings
Assistant State’s Attorney Theodora Green read two letters Ellis wrote to Box the month she was killed, writings the jury was not told were penned from Stateville Correctional Center. The panel was aware that the couple was apart from January to April 2016 but not that Ellis was incarcerated, per an early ruling by Judge Randy Wilt.

While Ellis professed his love for Box, who he referred to as his fiancee, in letters dated April 1 and April 19, the prosecution said he used them to forewarn the 35-year-old mother about the consequences of seeing other men. Phrases like “Sh-t’s gonna get ugly for you,” and “I’d f-ck you up first hand,” were sprinkled throughout as Ellis revealed suspicions that Box was “cheating.”

“I hope you haven’t been f-cking cheating on me,” he wrote. “…I make a couple calls and n-ggas got your name in their mouth. …I hope we can make this sh-t work out. Shouldn’t be nobody telling me sh-t about you but you. I ain’t gonna get mad at you. Just keep it real with yourself 100 percent. …You know sh-t’s gonna get ugly for you, I promise.”

‘Head against the wall’
With her mother’s boyfriend moving back into their Louisiana Road home the next day, 13-year-old Markayla Box-McAdory spent the night of April 27, 2016 at her best friend’s house. The pair arrived at Box’s home around 5 p.m., the next day. Little did the teens know, Monica had already picked up Ellis from Stateville and the couple headed to the house to have sex in the second-floor bedroom.

Markayla, now 16, testified that when she arrived home, she saw Monica’s purse on the couch and her car in the driveway, which she said was unusual because she could not locate her mother. She then saw a nude Terrell Ellis walk down the stairs and exclaim, “Oh, sh-t.”

After the encounter, the girls went outside, chuckling at what they had just witnessed. However, there was still no sign of Monica Box. After a few minutes in her bedroom, Markayla dialed her mother’s cellphone but the call went to voicemail. Sounds of footsteps above them prompted the girls to search the house, eventually making their way upstairs to a half-dressed Monica, slumped on the floor, unconscious.

With Box’s car now gone from the scene, Markayla dialed 911 and described her discovery in detail.

“Something’s wrong with my mom,” Markayla told the dispatcher. “She’s bloody. She was on the floor. Her head is against the wall. There’s blood on the floor.”

As Markayla remained on the call, telling the dispatcher, “he left,” her friend retrieved two knives from the kitchen in case Ellis returned. Police and EMTs soon arrived and Monica Box was transported to a local hospital where she was pronounced dead.

Cleanup interrupted
Among blood found in several places inside Box’s house, police discovered bloody paper towels, a mop, the laundry basket hidden in a storage area, a bucket containing a liquid Rockford Police Detective Vince Kelly testified smelled like bleach and a bloody hammer. Blood smears on the bedroom floor indicated that someone attempted to wipe it clean.

“We found evidence that blood had been wiped away,” Green said, adding that Ellis failed to cover his tracks because the teens spoiled the attempt. “He’s the one that did the cleanup because he’s the one that murdered (Monica).”

“He put two and two together and made good on his promise,” Green told the jury. “He saw that pregnancy test, accused her of cheating and beat her for it.”

And it wasn’t just any beating, Green said. Box took repeated blows to the head with a hammer and was hit so hard with the basket the bottom shattered, leaving pieces of white plastic tangled in Box’s hair. Matching shards of plastic were found on the bedroom floor and in a trash can.

“(The injuries) illustrate the blunt trauma Monica Box received,” Peters said. “It was hard enough to cause bleeding and cause her death.”

DNA
Forensic scientist Heather May testified that Ellis’ profile can be included in DNA on the hammer found in Box’s kitchen. His DNA was also on the bloody laundry basket and an upstairs light switch.

Fingernail and hair samples were taken from Box but were not tested for DNA. Semen was also found during her autopsy.

‘Reasonable doubt everywhere’
Defense attorney Glenn Jazwiec attempted to poke holes in the prosecution’s theory, namely the circumstantial evidence, telling the jury nobody saw Ellis kill Box. He said while the girls identified Ellis in court, they gave inconsistent statements about the naked man they saw at the crime scene.

Jazwiec noted that Box was not pregnant and challenged the theory that Ellis killed her after finding the opened EPT.

Jazwiec also questioned the DNA findings. He said while Ellis’ profile was on the hammer handle and head, Box’s DNA was only found on the handle. As for the hammer being the murder weapon, he said nothing supports that. Peters, he said, did not indicate that Box’s injuries were consistent with those made by such a tool.

Jazwiec said the timing of evidence collection and testing was suspect, too. He noted that Box’s hair samples and fingernails were not tested for DNA, the hammer was not found until April 29, and that some evidence was not processed until months later.

“You say, ‘It’s the boyfriend,’ then tailor the facts,” Jazwiec said. “They honed in on Mr. Ellis. They want Mr. Ellis to be the one who committed the crime. The state has failed to prove Mr. Ellis guilty beyond a reasonable doubt. There is reasonable doubt everywhere.”

Members of Ellis and Box’s families were in the courtroom when the verdict was read. They declined to comment.

Ellis faces life in prison. He is lodged in the Winnebago County Jail and is due back in court May 31.