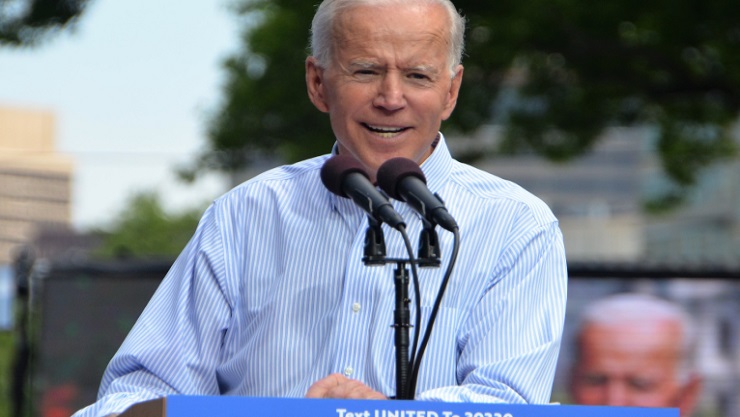 “The world’s democracies look to America to stand for the values that unite us. … Donald Trump seems to be on the other team,” Biden said during a foreign policy speech in New York, hammering the president for “embracing dictators who appeal to his vanity” and emboldening a worldwide rise of nationalism, xenophobia and isolationism.

The remarks offered Biden a chance to ignore his Democratic rivals and instead return to the issues he’s most comfortable talking about: foreign policy and the dangers posed by Trump. The decision to make the speech reflects Biden’s belief that his experience as a longtime senator and former chairman of the Foreign Relations Committee combined with his eight years as vice president distinguish him in the crowded Democratic field.

But that long record also subjects the 76-year-old to criticism, particularly from progressives who cast Biden as someone who enabled a more hawkish foreign policy establishment.

Acknowledging those forces, Biden promised to “end the forever wars in Afghanistan and the Middle East” and terminate U.S. involvement in the Yemen civil war. He did not mention his support for the 2003 invasion of Iraq under President George W. Bush, a vote that hampered Biden’s brief 2007 presidential campaign and continues to draw criticism from 2020 rivals, including Vermont Sen. Bernie Sanders and Washington Gov. Jay Inslee, who both voted against the action as House members.

Republicans, meanwhile, have gleefully noted that Biden opposed the 1991 U.S. military actions to drive Iraq out of Kuwait and that he was an outlier in the Obama administration in warning against the raid that ultimately killed Osama bin Laden, the mastermind behind the terrorist attacks of Sept. 11, 2001.

Biden said on Thursday that military force will always be an option, but must be a “last resort” with a “defined” and “achievable mission.” He also pledged to “elevate diplomacy as the principle tool of our foreign policy” and said he’d rebuild expertise in the State Department after an exodus of diplomats under Trump.

His promise to stop “endless wars” also came with qualification; he called for removing most combat troops from Afghanistan in favor of “narrowly focusing our mission” in the region.

Biden envisioned not just a return to the traditional U.S. role in the post-World War II international order, but to use that power and influence to take on 21st century problems. He emphasized the urgency for U.S-led global alliances to combat the climate crisis, forge new trade agreements to create a more even international economy and to recommit to nuclear proliferation.

Biden said in the first year of his presidency, he would convene a global summit of democracy, bringing together political and civic leaders, along with those from the private sector. He singled out “tech companies and social media giants” as necessary partners.

“I believe they have a duty to make sure their algorithms and platforms are not used to sow division here at home,” he said, referring to U.S. intelligence findings that Russian actors have used social media platforms like Facebook to influence American politics.

Biden’s speech comes at a time of trade tensions with China; increasing tensions with Iran, with Tehran announcing that it is enriching uranium beyond the levels allowed by a 2015 nuclear deal that Trump had abandoned; and after Trump again met with North Korean dictator Kim Jong Un, with the Republican president saying he wants to restart negotiations for a nuclear agreement.

As president, Biden said he’d re-engage with Iran if it returns to the limits of the 2015 deal. He also promised to immediately rejoin the Paris climate agreements and urge the world’s leading economies — principally China — to commit to aggressively curtail carbon emissions.

He noted Beijing is investing heavily in cleaner energy technologies but still financing traditional fossil fuel projects with trillions of dollars in infrastructure development across Asia.

Biden’s commitment to ending longtime wars stopped short of pledges by more liberal rivals like Sanders and Massachusetts Sen. Elizabeth Warren, who link military conflict to a world economy dominated by multinational corporations, including those that have benefited from the trillions of dollars the U.S. has spent on foreign wars in recent decades.

Though he didn’t nod to that military-industrial complex, Biden argued that economic conditions play a fundamental role in global stability. He criticized Trump’s reliance on tariffs but tacitly agreed with the president’s notions that some economic rivals have taken advantage of the U.S., specifically China.

“There’s not going to be a back to business-as-usual on trade,” he said. “We need new rules. We need new processes.”