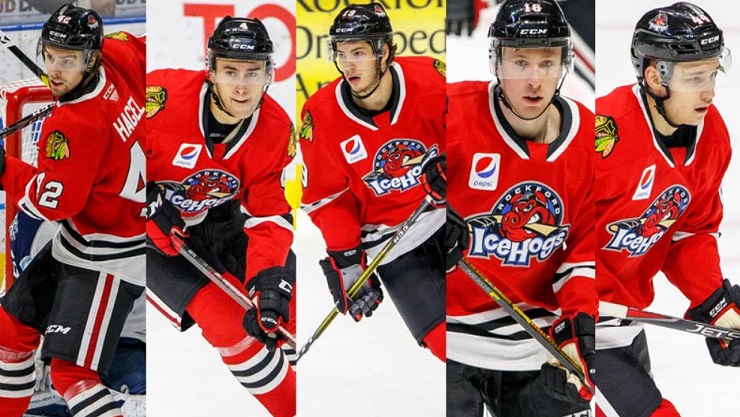 CHICAGO – Of the 36 players listed on the 2019 Chicago Blackhawks Development Camp roster, five skated with the Rockford IceHogs during the 2018-19 season.

The camp roster features defenseman Chad Krys and forwards Brandon Hagel, Reese Johnson, Philipp Kurashev and Dylan McLaughlin. All five skaters joined the IceHogs late last season after their junior and college campaigns completed and combined for 11 assists in 33 games. Krys and Johnson led the group with four assists each.

Development Camp runs from July 15-19. On-ice sessions began Monday morning and will run from from 1-5 p.m. at Fifth Third Arena in Chicago. Practices will be conducted Monday-Thursday and the group will hold one scrimmage at 9:30 a.m. Friday.

2019-20 Season Tickets
Reserve seats for the IceHogs’ 21st season of professional hockey in Rockford and 13th as the top AHL affiliate of the Chicago Blackhawks are available. The IceHogs’ home opener is set for Saturday, Oct. 12 vs. Grand Rapids and ticket packages begin as low as $132 for an eight-game mini pack. Contact us at 815-847-6399 or visit IceHogs.com to claim seasts for this upcoming season.

The same, tired lessons of January