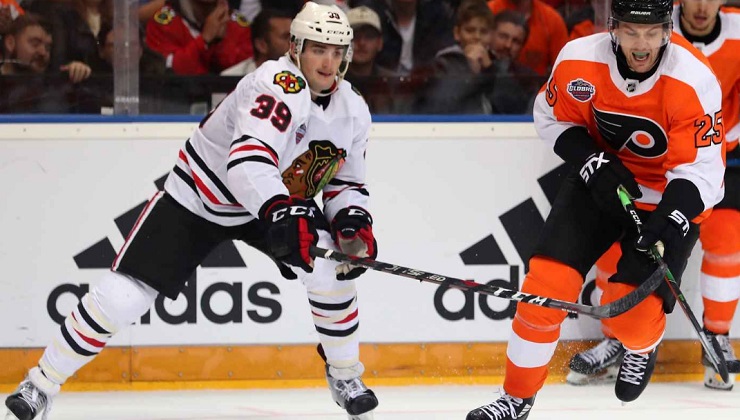 ROCKFORD – When Rockford IceHogs defenseman Dennis Gilbert came to the Chicago Blackhawks organizations at the end of his 2018-19 collegiate season at Notre Dame, he was like a lot of third-round draft picks: adjusting in hopes of having a solid pro career.

This season, it’s quite a different story for the Buffalo, New York native. He’s got his first AHL season out of the way and comes into the 2019-20 campaign not only as last year’s Most Improved Player, but a different one altogether. He impressed the Blackhawks in training camp more than your average third-rounder, which was good enough for Chicago to take him on its Global Series trip that included its season against Philadelphia in Prague last Friday.

Gilbert was a late call-up after being assigned to Rockford before the Blackhawks announced their opening day roster. However, because veteran Calvin de Haan was held out with a groin injury, Gilbert started the season up top instead of with Rockford in Iowa. And although he was reassigned the next day, more calls from the big club are likely to come sooner than later.

“I think my mindset coming here last year from the first day I got here was (to) not really look long-picture, but just to get better each day,” he said. “And having that mind and being consistent with working into that was an objective of mine that kind of paid off.”

Gilbert said he kept the same mindset over the summer as he prepared for camp, during which he proved he’s tough, physical and surprisingly skilled for a big, stay-at-home defender.

Gilbert, 22, finished the 2018-19 AHL campaign with five goals and nine assists in 63 games with Rockford and posted a game-high six hits in his NHL debut against St. Louis on April 2, his only recall.

And while he knows he’s improving, there’s a level he must reach to move beyond bubble status and be a fixture with the Blackhawks.

“I think I’m a good skater,” he said. “But I want to be a great skater. I’m a good defender, but I want to be a great defender. And to be great at that level, you have to be dominant at this level, so I am going to be working really hard in practice and in games to make sure I am pushing myself. Whether it’s my gap control, using my feet to get up ice and kill plays, being good offensively, taking a leadership role down here, all those things are going to help me get better.”

The Blackhawks are currently carrying seven defensemen, including Connor Murphy, who’s also recovering from a groin strain and was a scratch last Friday against the Flyers. Murphy has returned to practice while de Haan has not as of this report. If both are scratched for tomorrow’s home opener against San Jose, Gilbert will likely get another call.

Bacon Bits
Rockford dropped its season opener 3-2 at the Iowa Wild last Friday. The IceHogs are now 8-11-1-1 all-time in the first game of the season, including 4-7-1-1 during AHL affiliation. The last time Rockford won a season opener was a 4-0 shutout of Cleveland to begin the 2016-17 season.

Matthew Highmore scored the IceHogs’ first goal of the season with a shorthanded strike in the second period at Iowa. Highmore leads all IceHogs skaters (at least 50 games with the team) in goals/game since making his debut during the 2017-18 season with 28 markers in 77 contests (.36 goals/game). In addition, he now has nine goals with two hat tricks in 11 career games against the Wild.

Entwistle picked up his first point (assist) in his first pro game Friday. The rookie forward tallied a point-per-game average in the OHL last season and won a second consecutive OHL championship. He concluded the regular season with 57 points (30g, 27a) in 57 games between Hamilton and Guelph.

Dylan Sikura scored a goal against the Wild and has now tallied five goals over his last seven AHL games with the IceHogs dating to April 2. Including Friday’s marker, Sikura now has points in 11 of his last 15 AHL contests and 14 total points (5g, 9a) over that 15-game span dating Jan. 21.