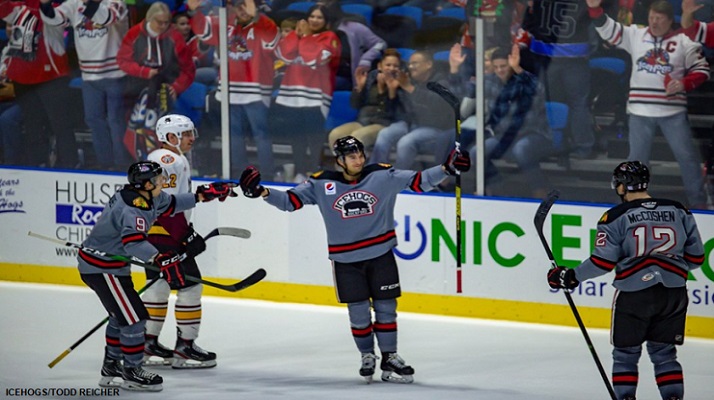 ROCKFORD – Dylan Sikura netted a hat trick in the third period to spark a six-goal comeback that sent the Rockford IceHogs roaring back to defeat the Chicago Wolves 7-4 Sunday afternoon at the BMO Harris Bank Center.

The IceHogs have now won three straight games and five of their last seven contests dating to Oct. 18.

With the contest knotted 4-4, Sikura again delivered for the Hogs, this time one-timing a cross-crease pass from Highmore to complete Rockford’s comeback.

Sikura then capped the trick less than three minutes later, putting the exclamation point on his four-point night. As Highmore battled to secure the puck behind the net, Sikura’s brother, Tyler, skated in towards Dansk and navigated around a pair of Wolves. Tyler Sikura then whipped the puck to an awaiting Dylan, who capitalized with a wrister in front of the net to finish the hat trick in a span of just 5:59 and give Rockford a two-goal cushion.

That hat trick was the first of Sikura’s pro career and gives the second-year forward 22 points (12g, 10a) in his last 23 AHL games.

Highmore (2a) and Wedin (3a) joined Sikura with multi-point nights, while goaltender Collin Delia earned his second win in three starts with 21 saves on 25 shots.