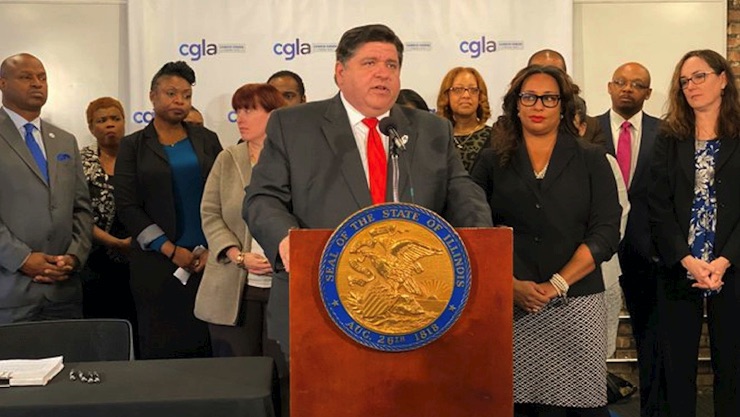 SPRINGFIELD – One month before the scheduled rollout of legalized marijuana in Illinois, Gov. J.B. Pritzker signed a follow-up bill to the initial reform Wednesday and took questions about the next phases of the implementation.

“It’s new territory, we’re seeing that in some of the cleanup that we’re doing in this bill,” said Sen. Heather Steans, D-Chicago, who sponsored the initial marijuana legalization measure.

Steans said the bill clarifies that public consumption of marijuana can be done in only a licensed dispensary or a retail tobacco shop. This will be allowed only if a local government authorizes it on the premises.

“They can only be in those two kinds of locations,” she said.

It also requires that individuals who have their records automatically expunged are notified when the process takes place. Medical cannabis patients aged 18-21 will now have full access to cannabis products, including combustible marijuana.

The bill also clarifies a “revolving door” provision of the initial law by prohibiting future members of the General Assembly and their families from having a direct financial ownership interest in a cannabis business until two years after that lawmaker leaves public office.

She said the bill moves up to July, from September, the earliest date municipalities and county governments can begin collecting taxes resulting from marijuana sales.

Steans said while the follow-up measure, referred to as a trailer bill, was mainly about technical changes, more substantial changes could happen in the future.

“We did not want to go back and revisit policy at this point in time,” she said. “We know we may do that going forward but we want to first get this up and running and see how it actually works.”

The lawmakers and stakeholders at the event emphasized that legalization is centered on racial equity and righting the wrongs of a decades-long war on drugs.

“Illinois’ historic cannabis law puts social equity above all else, and the result will be a market unlike that in any state in the nation – one that rights the wrongs of the past by offering new opportunity to communities that have been torn apart,” said Esther Franco-Payne, executive director of Cabrini Green Legal Aid, where Pritzker signed the bill in Chicago. “From ownership to jobs to expungement, disproportionally impacted communities will be revitalized when this law takes effect on January 1 and as the industry flourishes in the years to come.”

Pritzker said the state will start accepting applications for new cannabis licenses, including from social equity applicants, on Tuesday, Dec. 10, through Thursday, Jan. 2. Information about licensing is available via the Illinois Department of Commerce and Economic Opportunity.

Pritzker said the phased rollout of cannabis legalization will provide for 75 new dispensary licenses in May, at which point more social equity applicants will have the opportunity to be part of the marijuana industry. He said the initial 30 licenses go to those already in the medical marijuana business that had been licensed in the previous administration.

Pritzker said the bill was written this way to protect the medical marijuana industry, but it also limits minority participation in the first phase.

“We want the industry to be diverse,” he said. “We want black and brown people. We want people who’ve been left out and left behind to have a real opportunity to not only benefit from this new industry, but to create new millionaires in the black community, in the Latino community. … That’s the purpose of the phased rollout.”

Toi Hutchinson, a former state senator who helped craft the initial bill and has since been named senior advisor to the governor for cannabis control, said the phase-in is also designed to “protect future market opportunities for those equity applicants to come on board.”

“We’ve gotta get this thing moving…” she said. “We’ve gotta get the fees from the licensure to fund a revolving loan program so that we can cede equity to those applicants that we care so much about. And we’ve gotta make sure that we reinvest. This is the first state to take specific dollars from the point of sale and reinvest in exactly those same communities.”

The original bill creates the Restore, Reinvest and Renew program, which aims to “address the impact of economic disinvestment, violence, and the historical overuse of the criminal justice system,” according to the governor’s office.

“The focus was never to get as much money as you possibly can as fast as you can,” she said. “The focus has always been to create an equitable industry that looks different than anywhere else in the country.”

Study: Flu season not kind to the workplace