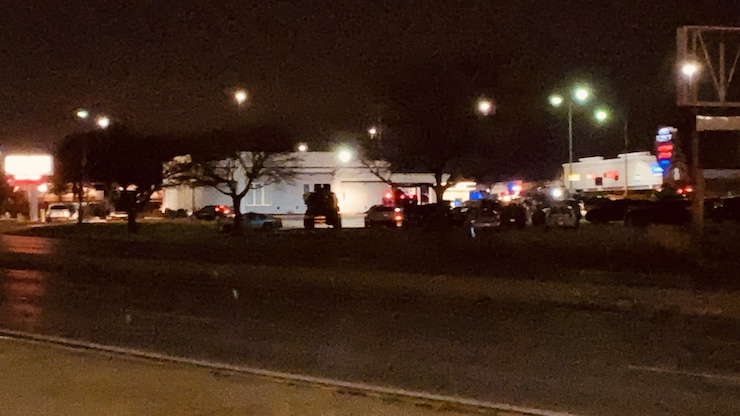 ROCKFORD –  The man who held a woman hostage for more than six hours inside an east-side credit has a documented history of violence against women, court records and social media posts show.

Police say at approximately 2:30 p.m., 39-year-old Nicholas August, of Rockford, brandished a pellet gun when he entered Heritage Credit Union at the corner of East State Street and Mulford Road and ordered everyone out of the building.

As the situation unfolded, reports that the credit union was being robbed circulated on social media, alongside a Facebook post by a local woman who claimed August abused her over the course their romantic relationship.

According to Boone County court records, August was convicted of domestic battery in 2018 and was recently wanted for violating probation. Since 2002, he was the subject of 13 orders of protection, each connected to domestic violence allegations.

With SWAT at the scene, Rockford Police crisis negotiators stayed in communication with August, learning he had allegedly taken a 39-year-old female employee as a hostage. Communication with the suspect continued into the evening as onlookers and reporters were stationed across the street.

August and the hostage were led out of the credit union just after 8:30 p.m. At least one news camera captured the moment, showing the pair exit with their hands up.

Photos of August and victim later appeared alongside news reports and were posted to several social media pages. The images were later removed when police announced that August was charged with two counts of aggravated criminal sexual assault.

“Her being transported to the hospital is not the best resolution we wanted,” Rockford Police Chief Dan O’Shea said. “But everyone is alive and we’ll go forward from there.”

While the consensus following August’s arrest was that the incident ended peacefully–without gunshots–another quickly emerged, that there is nothing peaceful about what Illinois calls sexual assault and other states refer to as rape.

“As more details from the Heritage Credit Union incident continue to emerge, I want to be clear,” Rockford Mayor Tom McNamara said in a statement. “It was not peaceful. My greatest concern is that the survivor receives all the support and resources she needs. This incident highlights why we need to continue our fight to end domestic and sexual violence in our community.”

August did not have a prior relationship with the victim, police said.

Several law enforcement agencies responded to the scene, including the Illinois State Police and the Federal Bureau of Investigation (FBI). Roads near the corner of East State and Mulford were reopened at around 9:30 p.m.

This story has been updated .