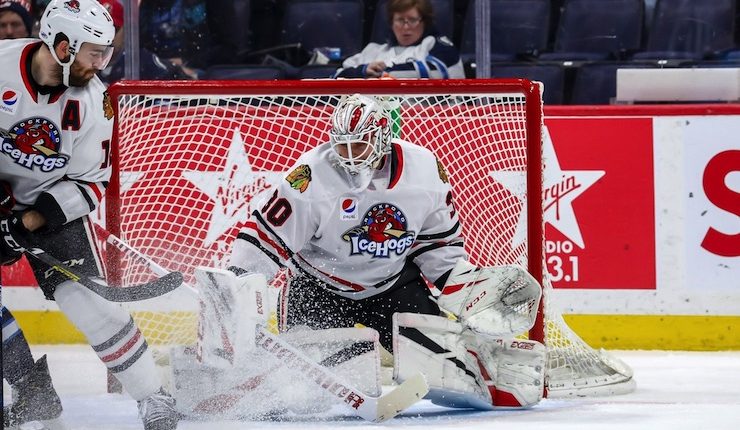 ROCKFORD – Goaltender Kevin Lankinen has been selected to representative the Rockford IceHogs at the 2020 AHL All-Star Classic in Ontario, California, later this month, the club announced Friday.

A Helsinki, Finland native, Lankinen starred in a shutdown effort against Milwaukee on Dec. 10, setting an AHL franchise record with 55 saves on 56 shots in a 2-1 overtime win against the AHL’s then top-ranked Admirals at the BMO Harris Bank Center. He also led his country to a gold medal at the IIHF World Championships this summer prior to the start of the regular season. Lankinen dominated through his eight appearances at the showcase, posting a 7-1-0 record with a 1.50 GAA and .942 save percentage for the Fins. He finished ranked first among tournament goaltenders in GAA and blanked an NHL-laden roster from Russia with a 32-shave shutout in the Semifinals.

Overall, Lankinen has recorded a 14-14-5 record with a 2.72 GAA and .909 save percentage through 33 career AHL games with Rockford from 2018-20. He will be the second IceHogs goaltender to attend the event after Michael Leighton represented the club during the 2015-16 season.

The 2020 AHL All-Star Classic presented by Ontario International Airport is set for Jan. 26-27 at Citizens Business Bank Arena. This yearâ€™s Skills Competition will be held on Sunday, Jan. 26 and the All-Star Challenge is scheduled for Monday, Jan. 27.

The teams will participate in a round-robin tournament featuring six games of 10 minutes, played entirely at 3-on-3. The two teams with the best records at the end of the round-robin will face off for the championship, a six-minute game also played at 3-on-3.

Under Trump’s order, GM could produce 100K ventilators per month

US eyes new COVID-19 outbreaks as testing ramps up

Local woman attacked by man she met on ‘dating’ app