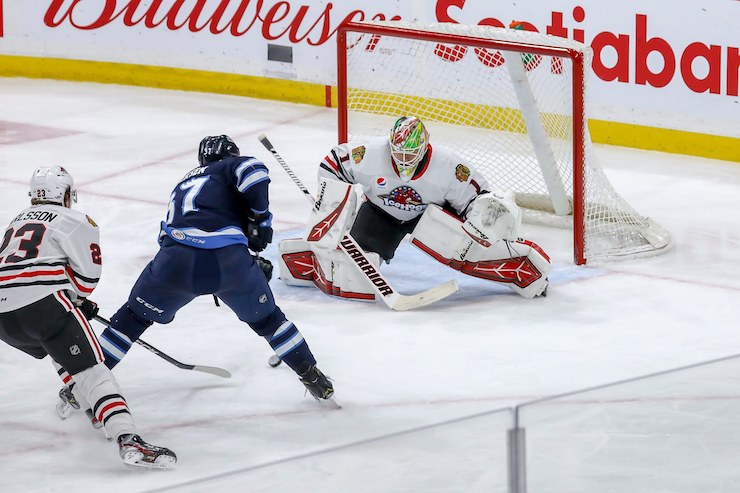 ROCKFORD – It seems like late September around the BMO Harris Bank Center these days.

That’s because between NHL call-ups and injuries, the Rockford IceHogs are now building their roster, something teams do at the beginning of a season, not halfway through it.

Rockford is currently without forwards John Quenneville, Dylan Sikura, and Matthew Highmore; defensemen Adam Boqvist and Dennis Gilbert and goaltender Kevin Lakinen–six guys the Blackhawks have recalled in response to a rash of injuries up top.

And while restructuring because of Chicago’s needs wasn’t enough for Rockford coach Derek King and General Manager Mark Bernard, various ailments put Alexandre Fortin, Mikael Hakkarainen, Philipp Kurashev, Anton Wedin and Tim Soderlund on the shelf. Philip Holm was granted his unconditional release Sunday, leaving the roster down another blue liner. In response, the IceHogs turned to the ECHL for some PTO players and even called on two defensemen to play forward while brass attempt to fill the holes. The IceHogs lost six straight games in the process and fell from second to fifth place in Central Division.

But, there’s plenty of hockey left, more than enough for Rockford to grab its first win of 2020 and jump back into playoff contention.

“There’s a lot of games left,” forward Jacob Nilsson said. “There’s no panic in the room. We are (still) having fun and working hard. And sooner or later, things will turn around if you work hard enough.”

The thinned-out IceHogs showed their grit Sunday against the Chicago Wolves, another Central Division team that’s doing what it can to remain in the postseason conversation. However, it was the Wolves who emerged with the win, their first against Rockford this season.

“It doesn’t matter who we have in the lineup, we’ve got to compete,” King said after the 3-2 loss. “And I think we competed hard. We had some opportunities. We made a couple mistakes here and there and they capitalized on it. They made some mistakes and we didn’t (capitalize). But I thought it was a pretty good game.”

The IceHogs dropped a 5-1 contest to the Iowa Wild Friday in Des Moines. Dylan McLaughlin netted his first AHL goal in the loss.

The task ahead of tonight’s home meeting with the Manitoba Moose has been acclimating new players forced to jump in cold last week to what’s already in place.

“It’s like training camp again,” King said. “We have to help them get on board with how our systems are. There’s a lot of bodies up and a lot of bodies (out) with injuries. And this is what we have.”

McLaughlin followed his first AHL goal with his second Sunday against the Wolves. He accomplished an identical feat with his first career AHL point last season, notching assists in back-to-back games (March 23 and April 14 vs. Milwaukee) for his first and second points of his AHL career.

Winger Spencer Watson signed a PTO with the IceHogs on Sunday and made his team season debut against the Wolves. Prior to joining Rockford, he ranked first in the ECHL in power-play points (16) and power-play goals (8), second in total goals (20) and tied for third in scoring (39).

Former IceHogs forward Dylan Sikura scored his first career NHL goal during Chicago’s win over Detroit Sunday at the United Center. He logged 13 assists over 43 games before finally lighting the lamp in his 44th NHL game with the Blackhawks. Including Sikura, five IceHogs skaters from the 2019-20 season have scored a goal with Chicago this season and combined for 11 total NHL goals on the year.

The IceHogs dropped each of their three games last week and have now suffered a season-high six straight losses since Dec. 21. The skid is currently the longest active winless and losing streaks in the AHL and is tied for the third-longest overall losing streak in the league entering Monday.

Goaltender Kevin Lankinen was named the IceHogs’ representative for the 2020 AHL All-Star Classic. He is just the second IceHogs netminder to attend the AHL All-Star Game.