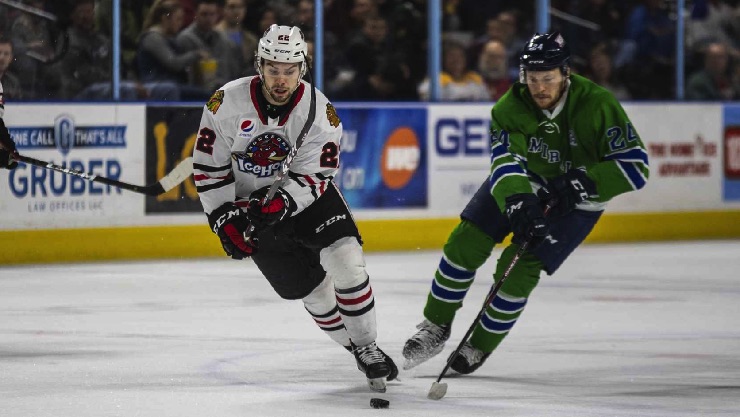 MILWAUKEE – With 6:51 remaining in regulation and the IceHogs down 1-0, Milwaukee broke in on a 2-on-0 rush. Delia followed a back-door pass across the crease and sprawled to blocker away the Admirals’ scoring chance.

However, Tommy Novak beat Delia three minutes later to extend the Milwaukee lead to two and put the game out of reach.

The IceHogs applied pressure late, but Admirals netminder, Troy Grosenick, shut the door to secure a 24-save shutout and the win for Milwaukee.

The two clubs will face off again tomorrow afternoon at 1 p.m. at UW-Milwaukee Panther Arena before heading to the BMO Harris Bank Center at 7 p.m. on Tuesday, Jan. 14.

Wednesday’s loss at Milwaukee extended Rockford’s road losing streak to four games…It’s the longest road losing streak of the season and marks the first time the IceHogs have lost four consecutive games on the road since the club lost five straight from Jan. 20 – Feb. 23 of 2018.

Brandon Hagel was held pointless in Friday’s loss at Milwaukee, but in 29 games since Oct. 30, there have only been two instances in which Hagel has not rebounded from a pointless performance to find the scoresheet the very next game…He’s been held pointless 12 times in that span but has tallied a combined 12 points (7g, 5a) in subsequent efforts.

Tyler Sikura’s minus-2 rating in Friday evening’s loss at Milwaukee marked just the second time in his last 20 games that he failed to register an even-or-better plus/minus rating…Sikura’s plus-8 rating on the season ranks second on the active IceHogs roster behind Lucas Carlsson (+9).