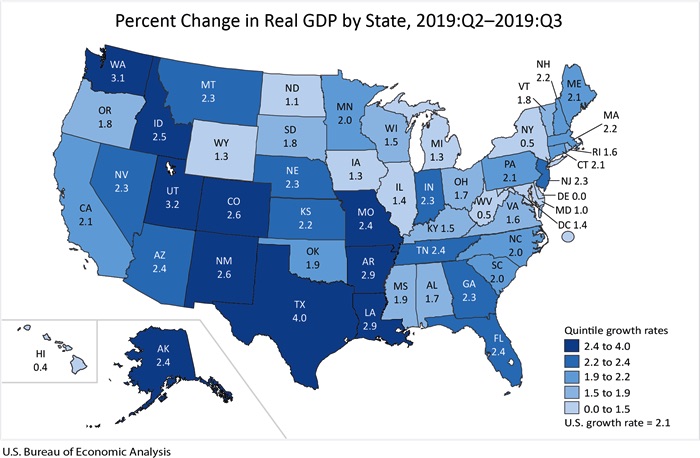 SPRINGFIELD — The Illinois economy grew at a slower pace than most neighboring states and the nation as a whole during the third quarter of 2019, according to new figures released last week.

The U.S. Bureau of Economic Analysis, which tracks state-by-state economic trends, said overall, the state’s economy grew at a modest annualized rate of 1.4 percent, well below the national rate of 2.1 percent.

Illinois ranked 41st in the nation for GDP growth during the quarter, according to the data. Texas showed the fastest-growing economy, at nearly 4 percent, while Delaware came in last with no measurable growth.

The bureau measures the gross domestic product, or GDP, for each state. That’s the total value of goods produced and services provided during a given period.

The biggest area of growth during the third quarter came from the professional, scientific, and technical services category, which accounted for nearly 9 percent of Illinois’ GDP during the quarter. That sector grew at an annualized rate of 5.8 percent, which translates to nearly $1 billion in economic activity compared to the previous quarter.

That sector was closely followed by nondurable goods manufacturing, which accounted for 6.3 percent of the Illinois economy during the quarter. That sector grew at a rate of 7.7 percent, or $961 million.

That was not the case with the manufacturing of durable goods, which are generally products that do not wear out quickly and can be used over an extended period of time, such as household appliances, vehicles and furniture. That sector, which makes up about 6.3 percent of Illinois GDP, shrank by a little less than 1 percent.

The retail industry posted a good quarter, growing at an annual rate of 7.3 percent, or about $750 million. Retail accounts for a little more than 5 percent of Illinois’ GDP.

But the growth in those areas was offset by steep declines in the finance and insurance sector, which shrank by more than 6.5 percent. That sector makes up nearly 9 percent of the state’s economy, so the decline there translated to more than $1.1 billion in economic activity.

The utilities sector also saw a sharp decline — more than 15 percent. But that sector accounts for less than 2 percent of the state’s GDP so the decline translated to only about $518 million in economic output.

Those trends were fairly consistent with national averages, BEA said. Declines in the finance and insurance industries were reported in all 50 states and the District of Columbia, while leading contributors to the nation’s GDP growth included nondurable goods manufacturing; retail trade; and professional, scientific, and technical services.