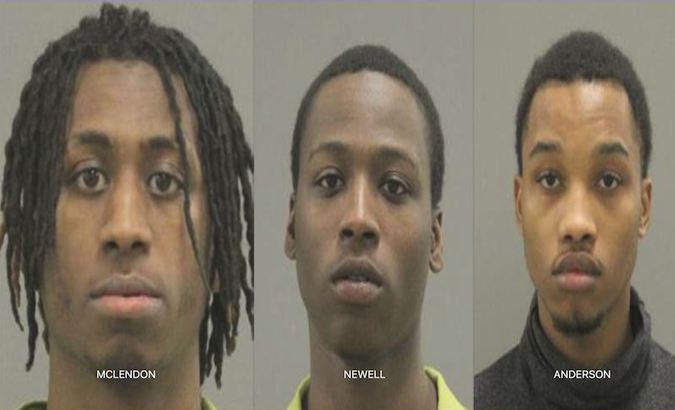 ROCKFORD – Three men were jailed Wednesday and charged with multiple weapons offenses after police responded to a shots-fired call on the northwest side.

At around 1:15 p.m., officers were called to the 2300 block of Quincy Circle and located multiple shell casings from two different calibers of firearms in the street. They also discovered that a residence and two parked vehicles which had been struck with gunfire.

During the initial on-scene investigation, a potential suspect vehicle was identified and later located by detectives vehicle in the area of Auburn Street and Kilburn Avenue. They followed the vehicle to the 1200 block of School Street where a traffic stop was conducted.

All of the occupants of the vehicle, with the exception of the driver, fled on foot and were subsequently apprehended by detectives and responding officers.

“As a result of this traffic stop and apprehension, detectives located two different firearms as well as spent shell casings inside the vehicle,” Rockford Police Public Information Office Michelle Marcomb said in a release.

Darious McClendon, 20, of Rockford, is charged with aggravated discharge of a firearm, unlawful use of a weapon by a known gang member, resisting arrest and no FOID.

Dwight Newell, 20, of  Chicago, is charged with aggravated discharge of a firearm.

Terrell Anderson, 19, of Chicago, is charged with aggravated discharge of a firearm, unlawful use of a weapon by known gang member, resining arrest and no FOID.

Jamario Neal, 20, of Rockford, is at large. He’s wanted for aggravated discharge of a firearm, unlawful use of a weapon by a known gang member and no FOID.

Anyone with with information on the whereabouts of Jamario Neal is urged to call the Rockford Police Department at 815-966-2900, or leave an anonymous with Rockford Area Crime Stoppers at 815-967-7867.