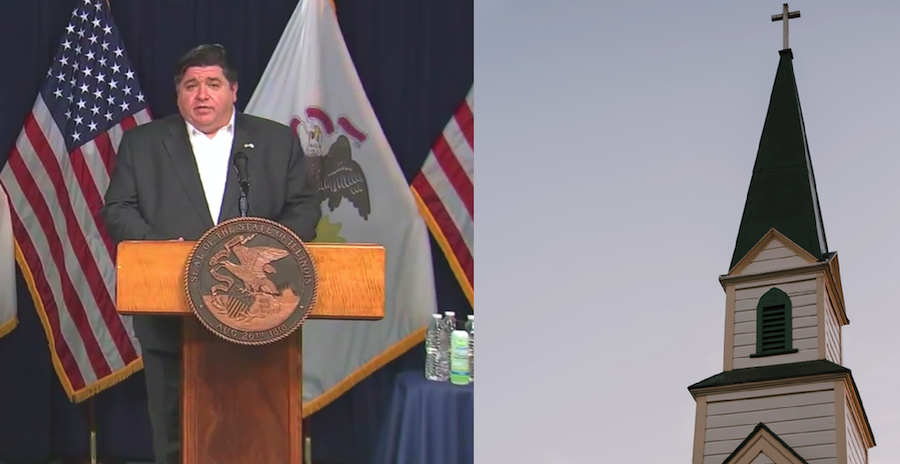 Instead, the governor’s office, on Thursday, released non-mandatory guidelines for places of worship to reopen, including recommendations for indoor services.

The state recommends outdoor worship gatherings including drive-in services, where congregants remain inside vehicles, and indoor meetings of 10 people or fewer. However, for churches where those options are not practical, officials suggest indoor services be capped at 25% or 100 attendees, whichever is lower.

The new recommendations come after several churches filed lawsuits challenging the governor’s restrictions for houses of worship, including one that ended up before United States Supreme Court. In that case, Justice Brett Kavanaugh ordered the Illinois Attorney General’s office to respond by 8 p.m., Thursday.

Attorneys representing those churches called Thursday’s announcement a victory for faith groups across the state.

“This is a total and complete victory for people of faith,” Thomas More Society Vice President and Senior Counsel Peter Breen said. “Illinois’ governor and his administration abused the COVID-19 pandemic to stomp on the religious liberty of the people of Illinois. By issuing guidelines only and not the previously announced mandatory restrictions, he has handed a complete victory to the churches in Illinois.”

The Thomas More Society represents three churches, including the Beloved Church in Lena, that challenged Pritzker’s executive orders. The firm was claiming religious discrimination and violations of the United States and Illinois Constitutions and Illinois’ Religious Freedom Restoration Act.

The governor said he wasn’t shaken by the lawsuits, saying he made the decision to lift in-person worship restrictions after reviewing input from faith leaders.

“Having received many plans and ideas from responsible faith leaders, IDPH has reviewed many detailed proposals and has provided guidance, not mandatory restrictions for all faith leaders to use in their efforts to ensure the health and safety of their congregants,” Pritzker said. “This includes suggestions on capacity limits, new cleaning protocols indoor gatherings of 10 persons or less a reduction of activities like sharing food, and the safe conduct of outdoor congregating. The safest options remain remote and driving services, but for those that want to conduct in person activities, IDPH is offering best practices.”

Under the Restore Illinois plan, churches were capped at 10 attendees for indoor services during Phase 3, which begins Friday, May 29. The plan called for 50 people in Phase 4, and did not allow for full capacity until Phase 5, which would have put faith groups to around Sept. 1 before they could fully reopen their facilities.

The governor is expected to file a new executive order Friday.

The Winnebago County Health Department released guidelines for worship services Wednesday. Local officials recommend that indoor seating capacity should not exceed one person for every 113 square feet, which equates to a 6-foot radius per person. Shared items like hymnals, offering plates and bulletins should not be used. Congregational signing, choirs or bands are also not recommended.

The Illinois Department of Public Health announced 1,527 new cases of coronavirus disease, including 104 additional deaths, Thursday. There have now been 115,833 cases, including 5,186 deaths, in 100 counties. Within the past 24 hours, laboratories processed 25,993 COVID-19 tests for a statewide total of 829,966.

Minnesota National Guard called in as looting breaks out in St. Paul over death of George Floyd