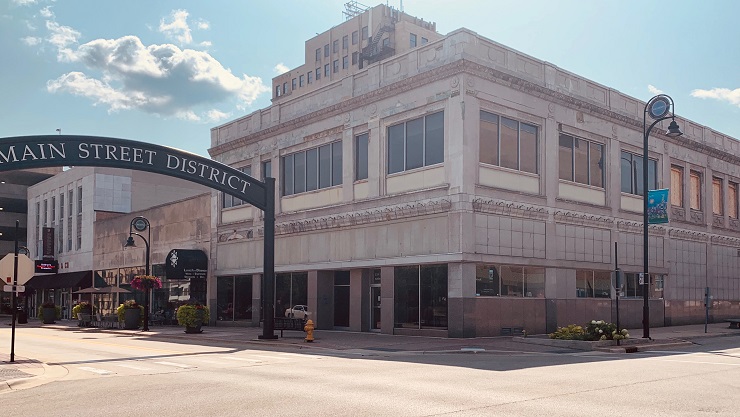 ROCKFORD – A developer may get another shot at re-purposing a vacant city-owned downtown building after the Planning & Development Committee gave its blessing to a new agreement.

Under the proposal, the city would sell 134 N. Main St. for $1 to Joseph James Partners, headed by SupplyCore CEO Peter Provenzano, who now seeks to use the building for second-floor offices  and commercial space on the ground floor. The project would allow SupplyCore to further expand from 303 N. Main St. The company operates its MPowr division out of 127 N. Wyman St.

Under a 2015 development agreement, Joseph James planned to convert the Main Street building, formerly occupied by Trekk Design, into a four-floor, 76-room boutique hotel. That plan was fell through after the developer missed construction deadlines and asbestos abatement wasn’t done. That forced the city to issue another request for proposal (RFP). Joseph James was the lone respondent.

According to the new agreement, the project still qualifies for pay-as-you-go TIF funds and River Edge Redevelopment Zone incentives. Joseph James Partners plans to invest $1 million and will replace the facade and the roof while the city will use more than $60,000 in grant money to remove asbestos.

The development agreement also calls for building permits to be issued within 30 days of Joseph James taking ownership. Work must be completed within a year.

Though she did not object to the project, Fifth Ward Ald. Venita Hervey is concerned whether Joseph James will see the project through.

“This is the same developer who had an agreement for several years, and for whatever reason never got started,” she said. “I am a fan of this particular developer. They have done some fantastic stuff.”

Hervey said a lot of her reservations lie in another uncompleted project Joseph James has undertaken at 220 S. Madison St., the former Millennium Center.  The previous council, at the end of Mayor Morrissey’s third term, approved pay-as-you-go TIF money to help turn the building into a boutique hotel which hasn’t materialized.

“I don’t feel comfortable turning around and doing almost the same thing unless I’ve got some assurance that this one’s going to be different,” Hervey said.

City Administrator Todd Cagnoni said while Joseph James did not complete the North Main Street hotel per the original agreement, the company did incur around $200,000 in the process for architectural and design work. And like the first agreement, Cagnoni said it is up to Joseph James to perform.

“The time frames that are put forth are those that have been provided by the developer,” Cagnoni said. “I can’t predict when the project when will be done other than (by) the benchmarks that have been established.”

“They were willing to take us up on a more specific timeline,” he said. “And that’s what we see in this agreement.”

As for 220 S. Madison Street, Cagnoni said Joseph James is “relatively close” on its ability to secure a full financial package and that the project is near completion.

“That was a complicated project,” Cagnoni said. “Getting all the financing in order has been difficult.”

Monday’s vote sends the agreement on to the full City Council, which meets next week.