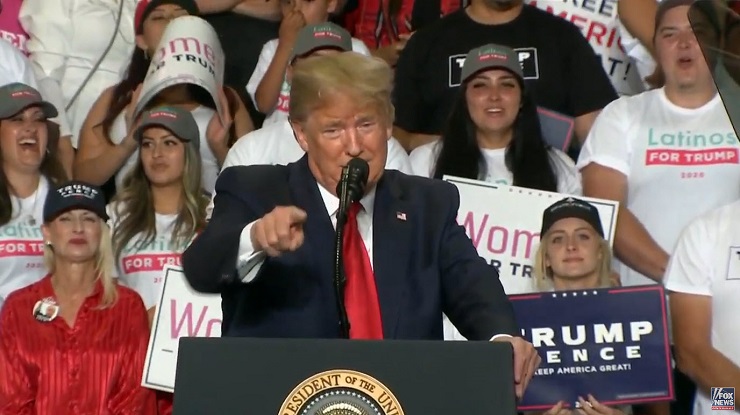 MINNEAPOLIS (AP) — The conflict and Twitter battles arrived in Minnesota well ahead of President Donald Trump’s touchdown in the state.

Trump traded Twitter insults with the Minneapolis mayor over who should pay more than $500,000 in security costs for Thursday’s rally at a downtown arena. He denounced Jacob Frey as a “Radical Left” lightweight and blasted the Democrat for a police policy banning officers from wearing their uniforms in support of political candidates. He sprinkled in a reference to his favorite foil — the city’s Rep. Ilhan Omar — just for good measure.

“Yawn,” Frey tweeted back. “Welcome to Minneapolis where we pay our bills, we govern with integrity, and we love all of our neighbors.”

It was just a warmup to Trump’s first campaign rally since being engulfed in the swirl of an impeachment investigation, an event expected to pack an extra punch. Heading to Omar’s home turf, a liberal outpost in the Midwest, Trump quickly stirred up passions and partisanship as few politicians can.

Trump will land in Minnesota as polls show Americans’ support for impeachment and for removing him from office have ticked up in the weeks since House Democrats launched an impeachment investigation. While his GOP allies have launched a campaign to reverse the trend, Trump’s self-defense may be the best preview of how he intends to fight back in the weeks ahead.

“He needs to be able to show right now, given all of this impeachment stuff, that America is rallying to his defense. And I don’t think that that is going to be the optic that’s created,” said Ken Martin, the state Democratic chairman.

Both sides are tuned in to the symbolism of the moment. The rally at Target Center— the city’s basketball arena— is expected to draw thousands of supporters as well as protesters outside. Trump will be joined by Vice President Mike Pence, who had a separate schedule of appearances in the state Trump is trying to tip his way next year.

At a White House event Wednesday, Trump made it clear he was looking forward to the rally.

“I think it’s a great state, and we’re going to have a lot of fun tomorrow night,” he said.

Minneapolis is a difficult place for the president to try to bask in the glow of support. Trump won just 18% of the vote in the dense, relatively diverse and liberal congressional district where he’s staging his rally.

But the venue serves another purpose: The district is now held by Omar, the Somali-American lawmaker whom Trump often holds up as a symbol of the liberal shift in the Democratic Party. It’s a message viewed as racist by some. He has tweeted that Omar should “go back” to her home country if she wants to criticize the U.S. Trump supporters broke into chants of “Send her back!” at a rally this summer in North Carolina.

The episode is weighing heavily on Trump’s Thursday rally. It drew criticism from fellow Republicans uncomfortable with the prospect of putting race at the center of the campaign.

Some lawmakers, including Senate Majority Leader Mitch McConnell, and some of the president’s closest outside advisers privately warned Trump about the damage those chants could inflict on the GOP, according to four Republicans close to the White House who were not authorized to discuss private conversations. They believed the sight of thousands of mostly white attendees chanting “Send her back!” would dominate news coverage and turn off moderate voters, particularly women and suburbanites.

Trump has held four rallies since. The chant has not erupted since.

Still, the attacks on the “socialist” wing of the Democratic Party are the heart of Trump’s plan to hold onto the Rust Belt and become the first Republican presidential candidate to carry Minnesota since Richard Nixon in 1972. Trump fell about 45,000 votes short of beating Democrat Hillary Clinton statewide in 2016. He’s had staff in the state since June, and they have been busy building a network to turn out supporters next November.

The campaign needs to pump up Trump’s support in the rural and suburban areas he carried in 2016 to overcome Democratic strength in Minneapolis, St. Paul and some other cities, plus suburbs that swung Democratic in 2018. The Minneapolis rally will also win media coverage well into western Wisconsin, widely seen as a critical battleground in 2020.

GOP Rep. Tom Emmer, who leads the House Republican campaign arm and will attend the rally, said the opposition to Trump’s visit could backfire on Democrats. Emmer was among Republicans accusing Frey of trying to block Trump’s rally.

Federal campaign law does not require presidential campaign committees to pay for expenses incurred by state and local governments in connection with a campaign event.

“I think this visceral hatred, the blatant attempt to shut down some people’s point of view and deny thousands of Minnesotans their voice … I think Democrats are going to pay for it at the ballot box next November,” Emmer said.

Omar, whose family fled Somalia when she was a child and who became an American in 2000, tweeted shortly after the trip was announced: “Our beautiful state welcomes everyone with open arms. But to be clear: we will continue to reject you and your campaign of lies and bigotry.”

Sophia Jungers, 21, of Minneapolis, was planning to protest Thursday, just as she did when Trump rallied in the southern Minnesota city of Rochester last October.

“I feel like we’re falling apart as a democracy, and we’re not taking advantage of all the voices that need to be heard,” said Jungers, a University of Minnesota student.

Michelle Urevig-Grilz, 49, a teacher from suburban Ramsey who identified herself as a longtime Republican voter but a Trump opponent, said she was considering joining the protests.

“He’s a misogynist pig. He always has been. … And it is surprising to me how many women voters did vote for Trump. That’s absolutely scary,” she said.

But few of Trump’s Minnesota supporters could be more excited than Mike Lindell, known to TV viewers nationwide as the “MyPillow guy” after the pillow company he founded.

Lindell, a significant donor who has appeared at previous Trump rallies, credits the president with creating a booming economy and giving entrepreneurs like him the confidence to take chances. He said he’s scheduled to speak Thursday.

“Everybody voted for him on faith,” Lindell said, “that there would be something good, finally, and boy has he provided it.”

Rockford drug dealer gets 15 years in prison for fatal overdoses