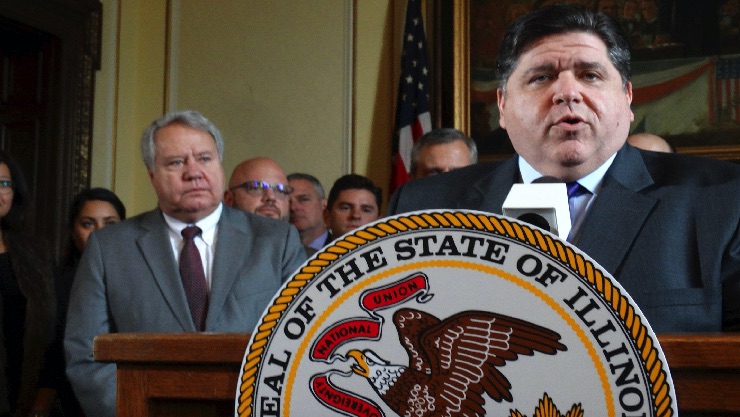 SPRINGFIELD – Senate President John Cullerton will resign from the General Assembly sometime in January, he told his caucus in a meeting after the fall veto session concluded last Thursday.

A definitive date has not been set.

The Chicago Democrat spent almost 40 years in the General Assembly, first serving in the House before moving to the Senate. He was elected president of that chamber in 2009, and one of his tasks was presiding over the impeachment trial of former Gov. Rod Blagojevich.

“I’ve had the pleasure to work with a body of Senate members who were equally resolute in moving Illinois forward and making the changes necessary to grow our economy and build a better future for our children and our communities,” Cullerton said in a statement.

“I look forward to watching this august chamber and all you will accomplish,” he continued. “As we all know, there will be bumps in the road, but they will be paved over with new ideas and solutions, and a constantly changing body of members who are eager to bring their own vision and signature to our illustrious Illinois Senate.”

Democratic Gov. J.B. Pritzker said he was “surprised” by the news. Cullerton is his senator.

As of 5:30 p.m. Thursday, he had not had a chance to speak to the Senate president “personally,” but Pritzker said he is “very sorry to see him leave his position.”

“I’ve known him for a number of years,” he said on his way out of the Statehouse. “I’m especially grateful for his having worked together with me in partnership with so many other members to get our agenda passed in the Legislature this year.”

Asked if he would play any role in finding a new leader for the chamber, the governor said he “hadn’t thought about it.”

In a statement, Cullerton pointed to a list he could “humbly brag” about accomplishing during his tenure: “two capital bills, marriage equality, abolished the death penalty, school funding reform (and) immigration reform.”

“I have known John for many years, but it has been during the last two years … that I have seen firsthand the integrity, honesty, and humor that he brought to the responsibilities his office entailed,” he said in a statement. “We may not have always agreed on how best to address the issues facing the state, but there can be no denying John always put the people of Illinois first.”

“The first was in 1947, fully 18 years before I was born,” Pritzker said during a news conference moments after the Senate passed the bill. “That year, the Commission on Public Employees Pensions issued a report that said, ‘In no phase of the pension problem is there such emphatic agreement on the necessity for corrective legislation as in the field of downstate policemen and firemen funds.’”

That year, a bill was introduced to consolidate what were then 133 suburban and downstate pension funds, but it never came out of committee, Pritzker said.

In the years that passed, the number of pension funds swelled to 649, and their financial problems have ballooned as well.

But supporters of Senate Bill 1300, the legislation now headed to Pritzker’s desk, say the consolidation of those funds into just two – one for police officers and one for firefighters – will go a long way toward putting the funds on a path to stability and relieve pressure on local governments throughout the state to raise property taxes to fund those pension systems.

“This bill does all that,” Rep. Jay Hoffman, D-Swansea, said during the news conference. “At the same time it makes sure that there still is local control over the determination of disability and the determination of benefits. That’s why I think it’s a win-win-win for everybody.”

The bill passed the House on Wednesday, 96-14. The final vote in the Senate to concur in amendments the House made to a Senate bill was 42-12.

Although it had bipartisan support, many Republicans, including some who voted for the bill, said they opposed a provision that retroactively enhances benefits for so-called “Tier 2” employees, those hired after Jan. 1, 2011, when the state implemented new retirement systems with substantially lower benefits.

The bill was the byproduct of a task force that Pritzker appointed in February. With passage of the consolidation bill, however, Pritzker said the task force’s work is still not done. He said in the coming months, it will continue meeting to work on recommendations for stabilizing city of Chicago pension funds and other statewide pension funds.

CHICAGO CASINO
Illinois lawmakers adjourned the fall veto session Thursday, Nov. 14, without voting on a bill to clear the way for development of a Chicago casino, despite last-minute efforts to get one through the House.

Instead, they passed a measure that makes only technical changes to the massive gambling expansion bill they passed this spring. That bill adds measures dealing with fingerprinting and other issues that the Illinois Gaming Board said were needed in order to process applications for all the new casinos authorized by that bill, as well as sports wagering.

Without that technical bill, its supporters said, those new gambling venues could not go forward, and the state would never see the revenue that has already been earmarked for large parts of the $45 billion public works package, or “capital bill,” that was also approved in the spring session.

But the failure to act on the larger casino bill angered many Chicago-area lawmakers who accused their downstate colleagues of engaging in “regionalism.”

“You know what else is going to jeopardize the capital bill?” Rep. Kelly Cassidy, D-Chicago, asked on the House floor. “Not having a Chicago casino.”

Cassidy noted that, earlier in the day, Chicago-area lawmakers had supported a bill to consolidate suburban and downstate police and fire pension funds, a bill that Gov. J.B. Pritzker’s administration had said was critical to stabilizing those funds financially.

“The Chicago members took the vote that didn’t help our police and fire (pension funds) on the promise that they would be made whole later,” she said. “We took a leap of faith. But this body … needs to stop the regionalism.”

The failure to pass a Chicago casino bill came despite personal lobbying efforts by newly-elected Chicago Mayor Lori Lightfoot, whose city faces a projected deficit of more than $800 million.

Proponents of the casino said they will resume their efforts when the General Assembly reconvenes Jan. 28 for the start of the 2020 session.