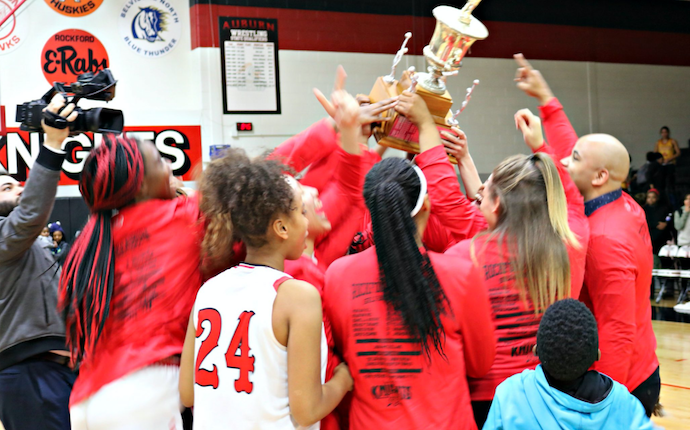 ROCKFORD -The Auburn Knights, who clinched the NIC-10 championship earlier this week, ended their conference schedule with  a 62-31 win over Jefferson Thursday.

It was senior night and the Knights have seven. The coaching staff started five seniors and the first two off the bench were seniors as well.

That relegated its top two scorers, Zhkylah Evans and Brooklin Gray, to the bench for much of the first quarter. It didn’t matter against the rebuilding J-Hawks who have no seniors. Ten Knights scored, led by Evans’s 11 points. Madison Hoel and Mariah Hill, who will team up again next fall at Rock Valley College, added 10 points each.

The Knights finished conference play at 16-2. It is the first NIC-10 championship by a District 205 school since the 1990-1991 season and just third overall.

Auburn will continue to try to make history in the IHSA playoffs. Auburn is in the Harlem regional of the Huntley sectional in the Class 4A playoffs. The Knights open Tuesday against the same Jefferson squad. The winner of that game will play the winner of the Harlem-DeKalb game on Thursday.

It’s a dangerous regional for the Knights. Harlem has handed Auburn (24-6) two of its six losses this year.