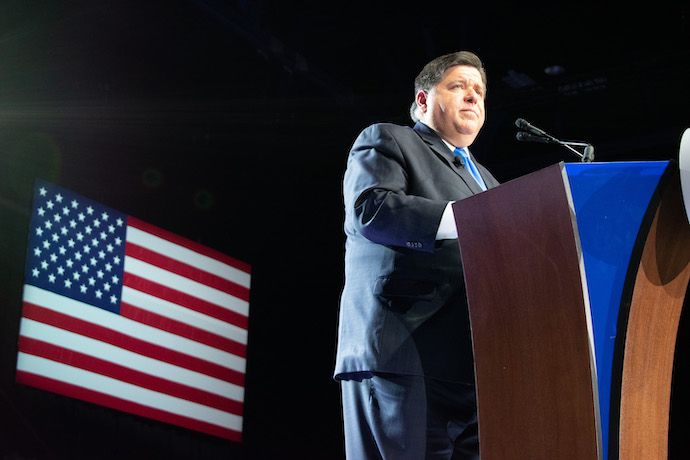 CHICAGO – Illinois has fallen short of Gov. J.B. Pritzker’s goal to test 10,000 people per day for COVID-19, the disease caused by the novel coronavirus, in 10 days.

Pritzker said the state has only just surpassed 6,000 tests per day.

Ten days ago, he said the key to reaching the goal was automation–by way of machines that claimed to process thousands of tests. That’s why the state partnered with Thermo Fisher Scientific, a major supplier of molecular testing equipment that supplies COVID-19 testing solutions to state and commercial labs.

“We acquired five, high-volume RNA extractors from Thermo Fisher, each of which promised to run 200 tests per hour,” the governor said.

The machines were distributed across the state’s three laboratories.

“Some quick math will tell you that these extractors will increase our testing output by thousands per day when running effectively,” he said. “Over the past 10 days, working alongside experts from Thermo Fisher, we are still not getting the level of output that we want to see from these machines.”

The were not producing valid results either, not in a way that meets the state’s exacting standards.

“I will not sacrifice accuracy for the sake of speed,” Pritzker said. “These tests, and the results they will provide, are too important. We have to get this right.”

Pritzker still believes in automation, and will continue to work with Thermo Fisher to dial things in. But, until then, its equipment won’t be part of the testing capacity.

“I want to honest with you,” he said. “We are choosing the best path, not necessarily the easiest path.”

Illinois could use private testing labs used by the federal government. They’re accurate. But they’re not suitable for what Pritzker is looking for.

“Those labs take seven to 10 days to produce a result,” Pritzker said. “People could end up on a ventilator before they even get their testing result. That’s just not a timeline I want to bet on.”

“No matter how much is beyond our control, the buck stops with me,” he said. “And we are still not where we need to be on the testing front.”

Moving forward, Pritzker said he is turning to in-state universities and local scientists who are creating their own raw materials, instead of relying on the global supply chain.

“Our institutions are developing and distributing their own viral-transport medium, known last VTM, and the necessary re-agent, locally.”

Hospitals and labs that are running low on VTM will be able to access it from their local emergency management agency’s resource request systems, he said.

“We are now running three shifts at one of our state labs, with the other two moving to match their capacity soon,” Pritzker added.

A total of 96 locations are now collecting specimens, which has allowed the state to surpass the 6,000 test per-day mark. Rapid testing is ramping up, too.

“I spoke directly with the president and CEO of Abbott Labs the night they announced their five-minute rapid test for COVID-19,” Pritzker said. “They expressed their genuine interest in taking care of their home state. And for that, I am very grateful.”

Abbott has dedicated supplies to support around 88,000 COVID-19 rapid tests per month–about 3,000 per day–in Illinois. The first batch, however, was redirected by the federal government to private systems like Illinois-based Physicians Immediate Care, which is rolling them out within the week at all of its clinics.

Although Pritzker would have liked to have had input on where the first batch of rapid tests was distributed, he said they will be effective nonetheless.

“We believe this new test capacity will begin to show up as soon as these labs start to utilize their full capacity,” he said.

The Illinois COVID-19 death toll rose by 82 Wednesday. Sixty-two of those fatalities were Cook County residents, the majority older than 60 with an array of underlying health conditions.

Based on models released this week, Illinois could hit a peak in new infections by April 11. The model also projects that the state could lose somewhere between 1,000 and approximately 2,800 people to covid-related issues by Aug. 4.

The state remains under a stay-at-home order through April 30.