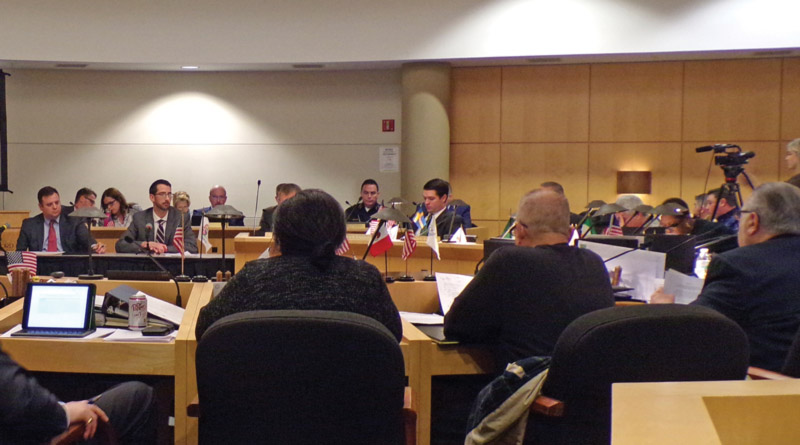 ROCKFORD — As the debate continues whether to reinstate home rule, Rockford leaders are cutting to the chase about what the tool could mean for the city.

Rockford Mayor Tom McNamara, the oft target of social-media charges that he intends to bury the city under mountains of debt and taxes imposed behind closed doors, has been on the front lines educating voters what becoming a home rule municipality would entail.

McNamara has also not been quiet about the fact that home rule does come with a significant amount of power. But it is not absolute as opponents suggest. Existing state laws prohibit that sort of wield.

“Those who know our council process understand that we have the (Illinois) Open Meetings Act,” McNamara said. “All of our council meetings are streamed online and televised.”

Changes under home rule would follow the same council process, the mayor said, and adhere to what is now a running total of nine self-imposed limitations. Automatic layovers, tax caps, public notices and public hearings are just some of what is being written into those proposals.

“The No. 1 thing we agree on, whether you agree with home rule or not, is that we need to provide our citizens justification and provide them with an opportunity to have a robust discussion about any increase in sales, property taxes or other increases,” McNamara said.

While most residents say higher sales taxes are anything but desirable, they’re easier to bear than those imposed on real estate in Rockford. Home rule, the mayor says, will remove a lot of the burden the city has placed on property owners. And although Rockford has held the line on its levy in recent years, the city still has some of the highest property taxes in the country. Taxes have increased nearly 80-percent since voters stripped the city of its home rule powers in 1983.

But home rule is just a tool. Even opponents agree on that, though they say it is one that doesn’t belong in Rockford’s toolbox. As the message went in the early ’80s, so goes it today. Book publisher and author John Gile claims its very existence, Illinois’ version of home rule, is not home rule at all—but a way for state Democrats to fleece and control the electorate.

“Our state’s version of home rule, created by the Daley-Madigan dominated 1970 Constitutional Convention, concentrates power in the hands of the political class and leaves citizens at their mercy,” Gile told aldermen Monday. “For example, the Illinois version of home rule allows cities to raise property taxes and to impose new taxes virtually without limit and without voter approval. It also gives city hall greater control over citizens’ property and over other rights related to earning a living.”

Gile says home rule comes with ills that have no cure.

“Keeping it out is important because once the public pocketbook is laid open with home rule, it is almost impossible to close it,” he said. “Damage done under home rule cannot be reversed.”

Gile added that he does not buy the mayor’s self-imposing limitations. He said while well-intended, they wouldn’t be binding to future city councils.

“They are merely the political equivalent of New Year’s resolution, here today and gone tomorrow,” he said. “Anyone familiar with the Illinois version of home rule knows that, and even a first-year law student could overturn those self-imposed limits.”

The limitations, however, would be city ordinances. And they’d be subject to repeal by any future city council according to Rockford Legal Director Nick Meyer, who says they would be as binding as any law until a governing body goes through the process to change them.

“Future councils could pass ordinances to rescind them or modify them,” Meyer said. “But it certainly wouldn’t be automatic.”

Others say home rule isn’t all about trusting elected officials with new powers. Aldermen already have similar powers to make a number of moves without voter approval. They could, for example, impose a utility tax just by reading it into their agenda. And although such a tax would be a significant revenue stream, the city has chosen not to impose it.

Fifth Ward Alderman Venita Hervey said voters should make an educated decision about home rule itself, not what could happen in the future by irresponsible leaders or horror stories about other cities.

Hervey said Gile’s claim that home rule has been responsible for Illinois’ population decline is anything but credible, adding that the state’s failure to pass a budget for 2 1/2 years played a much bigger role in the exodus. Cities had home rule long before Illinois started losing population, she said.

“If you want to talk about citizen loss,” Hervey said, “Rockford is No. 2 in the state for losing population, and we don’t have home rule. I understand if people don’t want home rule, they will speak against it and that’s OK. But I want people to get good facts, not scare tactics. Then I want people to make up their minds. But, don’t listen to everything that you hear about home rule.”

Hervey was even more blunt.

McNamara and Gile are scheduled to debate home rule Feb. 27. Gile wants the session televised. Details will be announced later.

Enacted in 1971, home rule is automatically granted to Illinois communities with over 25,000 residents. It allows for more local control and revenue streams otherwise limited by state law. R.